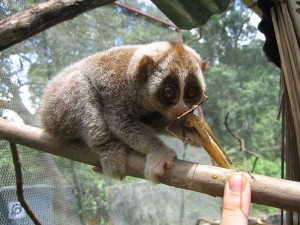 We all want the new thing, the item no one else has. The car. The handbag. The shoes and the gadgets.

But when does this obsession with new and unique go too far?

Is it okay to practice this same mindset when it comes to animals like the newly discovered pet, slow loris?

Exotic pets like the slow loris gain the attention and adoration of many people, because of their cuteness and peculiarity. But sometimes this adoration goes a bit too far, as in when people take in these animals as pets.

New type of slow loris already on the way out?

A new species of slow loris, the Nycticebus kayan, was recently discovered in Borneo. Exotic pet enthusiasts took to this news like people react to the release of a new iPhone. The potential to get their hands on a newly discovered species, in the 21st century, was too attractive to ignore.

And so illegal trafficking kicked in. These species from Borneo were shipped throughout the world, to people hoping for the next new thing.

But here’s the issue. This exotic-pet enthusiasm, while perhaps not intended to be harmful, does monumental harm to these fragile animals.

This is a problem far beyond the slow loris

You’d be hard-pressed to find anyone who doesn’t fall in love with a baby animal. Kittens. Puppies. Tigers. The problem is, exotic animals are no different from any other animal in the world, meaning … they grow up! And when they grow up, they become potentially dangerous. Furthermore, they become restless. Most exotic animals cover a large area of land in their natural habitat, thus treating them like a doggie-alternative is not going to appease their natural instincts.

It’s not just about animal safety. It’s about your safety too.

Even if someone were to bring home a seemingly harmless exotic pet, one who doesn’t appear ready to bite, scratch or kill, that doesn’t mean these wild animals can’t do extreme harm.

For example, all reptiles and amphibians carry salmonella, and nearly 80,000 cases of human salmonella poisoning in the U.S., each year, can be linked back to these animals.

Monkeys, African rodents, and other similar animals often carry dangerous viruses like rabies and herpes B, both of which can be fatal to humans.

Exotic for a reason …

Wild animals are called wild animals for a reason … they belong in the wild. Certain animals have been domesticated for so long (dogs, cows) that they need humans to survive. Exotic wild animals, on the other hand, do just fine without us, and, chances are, would prefer if we just left them alone.