Home Animal Welfare Driving Dogs Are Taking Over the World 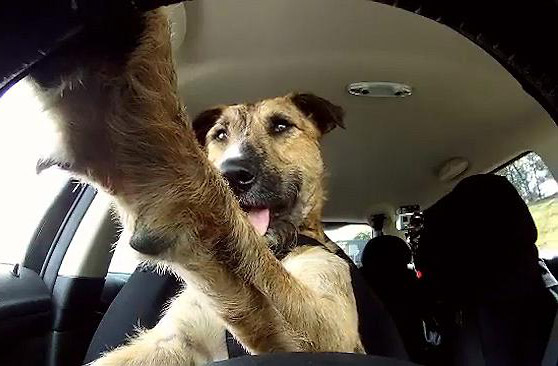 Imagine driving down the highway, glancing over at the car in the lane next to you and seeing a dog driving the car – yes, that’s right, a dog! That’s just a silly notion, because dogs don’t drive, right?

In an attempt to prove just how smart and capable dogs are, the Society for the Prevention of Cruelty to Animals – also known as the SPCA – teamed up with automotive company Mini Cooper back in December 2012 to teach not one, but three dogs how to drive. Surely there must be a gimmick behind this, you think, and you’d be right.

Each year thousands of animals are abandoned at shelters for various reasons. Many never make it out. To help dispel any notion that shelter animals – especially the ones who have been abandoned – are second-rate animals, the SPCA is carrying out a social campaign in hopes of creating awareness. Dogs learning to drive cars seemed to be the perfect idea. After all, if you saw a dog driving a car, it would catch your attention wouldn’t it?

The purpose of the campaign is to prove that dogs are not only loyal companions, they are very smart and have the ability to be trained – even to drive cars! By raising awareness, the SPCA along with Mini Cooper is seeking to bring a boost to the adoption numbers. Because there are so many shelter animals, it takes a little bit of creative thinking to get them to the forefront of people’s minds. With this though, teaching three dogs in New Zealand how to drive, they have certainly achieved their mission.

How to Teach Dogs to Drive

Obviously, modifications need to be made since our furry friends do not have opposable thumbs, the ability to reach the gas and brake pedals, or even the know-how of changing the oil, let alone operating a car. However, with a few modifications – namely to the brake and gas pedals – the dogs training was underway.

The video of one dog – Porter – has gone viral on YouTube and has been visited by over 8.5 million visitors from across the world. Other videos are available as well. Videos that depict the driving lessons that Porter had, as well as the other two dogs in the campaign, Ginny and Monty, underwent in order to learn how operate the cars.

On December 10th, the first video of Porter driving – with his trainer close at hand – took the world by storm, and the love for Porter the driving dog and his canine pals has yet to come to an end.

Granted, you will never see the dogs on a highway – all driving was done on an off-road course and the trainer was right on hand with specific orders for the dogs to follow.

The purpose, though, was served and with 8.5 million visitors in just under two months, we can only hope this sparks the interest in more people heading to the shelter to adopt some of these lovable furry friends.