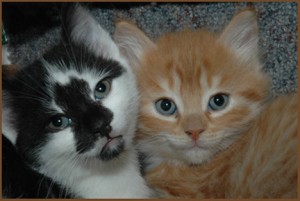 There has never been an easier way to determine which cat is best for you than simply picking it out by color.  Studies have shown that there is a link between the color of a cats coat and their underlying personality traits, which could help in choosing the best type for your household situation.  You may love white cats, but a gray colored one may be better suited to your needs.  Read on to see what colors lend to a certain personality.

Black cats are often pre-determined to be mischievous and even bring bad luck, but that couldn’t be further from the truth, no matter what suspicions you may hold.  Research suggests that cats with black fur are generally good-natured, loyal, and friendly, however stubborn is also a trait.  Studies conducted at the U.S. National Cancer Institute indicate that black fur may also be associated with health benefits including a resiliency to certain diseases.  Like black cats, black-and-white colored cats are also friendly, however they tend to wander off if a close eye is not kept, but are generally good-natured and calm.

Cats with white fur are often thought of as less intelligent, but that predisposition is due to the fact that cats with blue eyes are actually deaf.  Instead of coming when called or responding to their name being said, white cats will typically just stare at you!  Don’t let this personality trait scare you away from getting a white cat though, as some surveys suggest they are calm and peaceful, as well as friendly and outgoing.

Studies indicate that gray colored cats are peaceful, affectionate, gentle, and calm while cats with tabby markings tend to be home-loving, generally good-natured, friendly, and sometimes even lazy.  Ginger or red colored cats generally have opposite personality traits including unpredictable behavior, tempers, and can be less friendly.

Cats with calico markings (black, orange, and cream) are suggested to have different personalities based on the breed rather than the color alone.  Ranging from calm and sweet-natured to naughty and lively, calico colored cats are a toss up!  One trait that they do share is their tendency to eat too much and become overweight if not cared for properly.

Every cat will have different personality traits, regardless of their color, simply due to how they are raised, the type of household they reside in, and the level of care and attention they receive.  In order to choose the best cat for you, it is important to take all aspects of ownership into consideration and find the one you will want to make a part of your family!