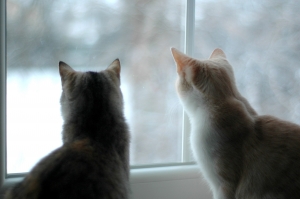 No one expected to find 199 animals in this rather unremarkable single-family home located in a quiet, somewhat affluent, suburb of Boston, Mass. But that’s exactly what Lynnfield police discovered after responding to a medical emergency on Feb. 26. Not only did they find a woman – Gaye Miville – dead, but they discovered that the home she shared with her husband was the setting of one of the largest cases of animal hoarding in recent memory. While Miville’s death was not criminal, the condition she provided her animals was.

Amid the floors caked with feces, odor that affected breathing, and crates and cages piled to the ceiling, were 77 cats, 81 birds, 27 dogs, 4 newborn puppies, 5 lizards, and 2 snakes.

The animals were voluntarily surrendered. A handful had to be euthanized due to medical issues, with the vast majority of the animals dispersed to local shelters, in the hopes that they’ll be rehabilitated and adopted.

The town of Lynnfield isn’t a heavily rural region, where homes have endless acres of space. While it’s an affluent town, it’s also a growing suburb, with homes built close to one another. How, then, could nearly 200 animals go unnoticed in such a small home?

Reports show that the animals didn’t go unnoticed – at least not entirely. Complaints of foul odors were made over the course of several years, but each time a health agent visited the home, Miville and her husband – Leonard – refused entry and claimed they only had three dogs, three cats, and one bird.

With so many complaints, couldn’t the town have received a warrant to gain access to the property? Yes, it could have; however, the exterior of the property didn’t show any indication of what was happening inside, thus a warrant was never requested.

And that’s the problem with animal hoarders – they hide their affliction well.

Animal hoarding is a mental disorder, wherein the hoarders actually believe they are helping these animals, rather than hurting them.  Much like anorexics have a distorted body image, animal hoarders don’t see their living environment for what it really is – complete mayhem and squalor.

In an effort to respect the privacy of citizens, the town of Lynnfield chose not to gain access – via a warrant – to the inside of the Miville house. They chose to judge a book by its cover, which is a reflex most of us would have.

However, animal hoarders are extremely successful at compartmentalizing their disorder, meaning it’s very possible that someone around you could be a hoarder, and you may not even know it.

Here’s how to determine if someone around you may be an animal hoarder:

According to the Animal Legal Defense Fund, up to 250,000 animals every year fall victim to hoarders. Their statistics show that the cases of hoarding has more than doubled over the past four years. Many states, at this point, do not have a legal definition for animal hoarding, thus prosecuting hoarders has proven to be a challenge throughout the country. However, as more people are being identified as hoarders, and as more education is demonstrating the type of abuse animals endure by hoarders, local communities and states are making a push to include a “First Strike and You’re Out” law that bans hoarders from access to their pets as well as the right to ever own an animal again, as hoarders are often prone to repeating their behavior.

If this Lynnfield case does anything, it should give us all a wakeup call that we can’t just assume that everything is right and rain, based on exterior appearances. Neighbors of the Mivilles had their concerns, and they voiced them. If only town officials remained persistent, perhaps these animals could have been saved years ago. If you have any suspicions of animal hoarding, contact your local officials and remain persistentt. You could save the lives of dozens  – if not hundreds – of animals.