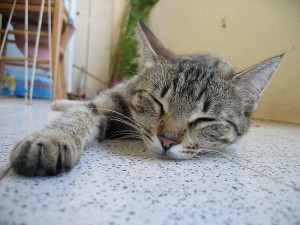 Cats are known for being less affectionate than dogs, and not so outwardly in their manifestations of friendship and bondage with their human owners. However, cats are loving creatures, only that they like to manifest their affection through different cat body language. Learn what your cat is trying to say to you, and see how much she or he loves you for yourself.

What is she trying to say by rubbing your head against you?

One of the common ways for a cat to express her love for her owners is to rub her head against them. Cats have special glands located on the forehead that help them release pheromones, which are smell markers. When your cat rubs her head against your legs, hands, and even your face, she is making you smell of her, which is a sign of taking into possession. What does this say? That you are all hers now.

In many ways, cats are subtler than dogs and this is something you need to understand if you want to get along with your cat. For instance, if your cat stares at you, without as much as a blink, it means that she is mad of you. However, if she is starting to blink slowly, while looking at you, that is her love look. If you want to test this theory, respond by blinking back slowly as well. You will see how enthusiastically your cat will get involved into this little game.

For cats, the belly represents a very vulnerable area of their body, which is why when they are in the wild, they are keeping it protected at all times. However, when cats feel safe, they are starting to roll over and turn with their belly up, which is the ultimate sign of the trust and confidence they have in you. Also, they love you when you caress their belly, and they will show their satisfaction by rolling over to one side and then to another.

Well, it is not like your cat is really trying to prod you for milk, but when she starts kneading your arm, your leg, or anywhere she can get her pawns on you, it means that she is showing her affection and contentment at her best. The kneading movement she is doing with her front pawns is very similar with what little kittens do when they are trying to stimulate milk flow from their mothers. However, as cats develop, they use this type of body language to show you just how much they love you, and sometimes they may even start drooling while kneading you.

Although you may be better used to dogs trying to follow you around everywhere you go, this kind of behavior is not unfamiliar in cats, either. Cats show their affection to their owners, not just by the signs described earlier, but also by following them around the house. Do not think that your cat is doing that just to get food, she also does that because she likes you a great deal and wants to be with you.