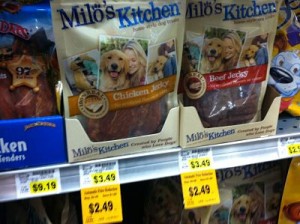 Pet owners are growing concerned over the not-so-safe ingredients that might be present in their dogs’ food. Just recently, Purina and Milo’s Kitchen, two important names in the market for pet food, have decided to recall some of their dog treats based on chicken meat coming from China.

Purina is pulling out Waggin’ Train and Canyon Creek Ranch, while Milo’s Kitchen is giving up on Chicken Jerky and Chicken Grillers. All these are dog treats based on chicken meat.

Since the decision of pulling out certain dog treats from the market sounds like a radical one, there is natural concern from pet owners in regards to the reason behind all these. According to the pet food brands, the chicken treats in question, may contain minute amounts of antibiotics that come from the chicken meat used in the manufacturing process. It appears that the antibiotics are present in chicken meat because they were used as treatment for the chickens the meat comes from.

The antibiotics in question are approved in China and Europe, but they are not according to US regulations, hence the decision.

Are the treats dangerous for pets?

Since this is the question on everyone’s lips, it is important to find a clear answer for it. Both Purina and Milo’s Kitchen say that the treats are safe for pet consumption, but they decided to pull out the products from the market, because they have not been manufactured according to standards. Since antibiotics should not be present in the said dog treats, their decision comes as a result of the recent findings.

Why have the regulators gotten involved?

The decision of pulling out the said products came after New York State Department of Agriculture discovered the presence of antibiotics in the aforementioned dog treats. While no official documents were issued regarding any direct link between the dog treats being pulling out and health risks, it seems that the investigators are onto something regarding the possible effect of some dog treats based on chicken meat (not the ones that are being pulled out) on the health of dogs.

The Food and Drug Administration has been investigating for years a connection between the wide consumption of chicken jerky treats and death causes in dogs. According to the official figures, around 360 dogs have died during recent years after eating such treats for more than one year and a half. While a direct link between the consumption of chicken dog treats and the 360 canine deaths is yet to be identified, the investigators are becoming more alert in regards to such products made in China.

On the other hand, regulators say that the commercial pet food that is currently sold on the market is very safe and it is according to standards. Purina and Milo’s Kitchen have taken the necessary measures to pull out the products that were not up to the required standards, in order to ensure the best of quality for their dog treats.