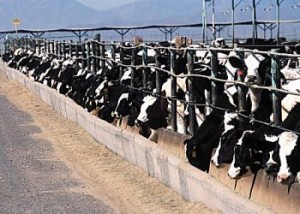 In 2012, an investigation of a Wyoming factory farm by the Humane Society of the United States (HSUS) led to convictions for nine of the farm’s employees in December. Less than two months later, a state senator and representative sponsored a bill banning undercover investigations into agricultural facilities. Wyoming isn’t the only state to draft what many animal rights activists call an “Ag-Gag” bill. Similar legislation is in the works in New Hampshire, Indiana and Nebraska.

After conducting their undercover investigation in 2012, HSUS submitted the evidence to law enforcement officials, according to a media statement released on December 24. HSUS also posted several minutes of graphic footage for public viewing in a YouTube video titled “Shocking Animal Cruelty at Tyson Foods Supplier.”

The video documents several instances of violent animal abuse by Wyoming Premium Farms employees. The HSUS voiced their approval when the nine employees, including two mangers, were charged with animal cruelty offenses.

“The Humane Society of the United States applauds the Wyoming Livestock Board and the Platte County Attorney’s Office for their serious attention to cruelty to animals, including animals raised for food,” said HSUS representative Adam Parascandola in the statement. “We are thankful that Wyoming has laws in place to address this senseless cruelty, and we hope that law enforcement’s action will deter further abuse on factory farms.”

Enter Wyoming’s House Bill Number 126 (HB 126). This piece of legislation, which was drafted in January 2013, prohibits many of the activities required to conduct undercover investigations. Currently, the bill’s sponsors plan for it to become effective on July 1, 2013.

The provisions of Wyoming’s HB 126 include bans on recording footage or sounds while trespassing in an agricultural operation or masquerading as an employee. Individuals are not allowed to gain access to the operation “under false pretenses” or leave hidden recording devices inside the establishment.

The bill effectively outlaws the type of investigation that HSUS conducted last year. First offenders may be imprisoned for up to six months and fined up to $750.00. Repeat offenses garner harsher punishments.

There is one spot of good news for animal rights activists. The bill also requires anyone aware of cruel treatment to animals in an agricultural operation to report it to the state’s livestock board. Failing to report cruelty is punishable with a misdemeanor charge, according to the bill.

Wyoming’s HB 126 has sparked concern in the animal rights community that new legislation in Wyoming, New Hampshire and other states is designed to hide animal abuse in factory farms. The Humane Society labels the new legislation as “Anti-Whistleblower Bills” on their website.