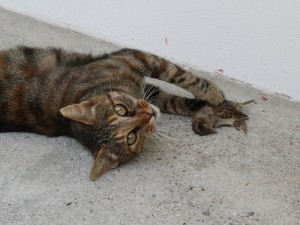 Would you give up your cat to protect the environment?

This is a tough question facing New Zealand pet owners this year after economist Gareth Morgan proposed banning cats by started the “Cats to Go” campaign. Before you get your hackles up, it’s worth mentioning that there are no plans to confiscate all the nation’s kitties and forcibly eject them. The main goal of the campaign is to encourage people to make their current cat their last for the sake of the country’s native animal species.

Why Cats Need to Go

“New Zealand is the last refuge of a huge range of bird species, we’re famous for our claim to be clean and green, and some of us have recognised the huge economic benefit, let alone the ecological dividend, from achieving a Predator Free New Zealand,” according to the Cats to Go campaign website. “Cats are incredibly effective hunters and are wiping out our native birds.”

There are no exceptions either. Even the most docile domestic cat contributes to the problem, according to Cats to Go. It’s not the rats that Morgan is worried about. Rather, native and introduced birds, insects and other small species are the ones in danger. Cats are hunters, as most pet owners know. It’s in their blood. They don’t intend to wipe out endangered species or disrupt a fragile ecological balance, but it may be an inevitable consequence of such a high predator population.

Many New Zealanders support efforts to protect endangers species, but there are also plenty who also love their furry friends. About 28 percent of New Zealand households have a cat and an additional 20 percent have more than one cat, according to a World Society for the Protection of Animals survey conducted in 2011. The total percent of cat-owning households is almost double that of neighboring Australia.

New Zealand has a lot of cats for its size and population, so it makes sense that they would be singled out as an ecological hazard. However, it also means that there is likely to be strong resistance against any move to rid the nation of domestic felines. Not that anyone will be forced to give up their cat.

From the looks of it, Morgan understands that this is an incredibly divisive issue. The site asks pet owners reading the site to view the facts about cats and wildlife before they “fly into a rage” over the campaign’s message. With the number of cat owners in New Zealand, this message is one that has plenty of inflammatory potential.

Ecologists, opinionated citizens and Morgan himself have engaged in discussion about New Zealand’s cat problem on Twitter. Not every mention of #catstogo is a serious one, but there is plenty of heated discussion on the issue. Morgan and Cats to Go aren’t on their own either. There are conservationists and ecologists who agree with the campaign’s message, that cats are a danger to New Zealand’s wildlife.

Even if New Zealanders decide to keep their cats, there are a few things they can do to reduce the impact their pet has on native animals: equip kitty with a bell, get him neutered and keep him inside all the time.