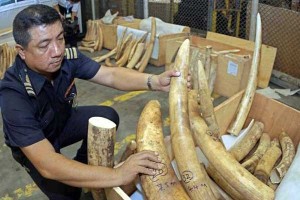 For Africa’s elephants, life in a national park isn’t poacher-free. After a recent head count at Gabon’s Minkebe Park, the Wildlife Conservation Society (WCS) reported the loss of 11,100 of the park’s elephants. The park’s current elephant population is less than half of what it was in 2004, with many of the losses occurring in the last five years, according to a WCS statement.

“This sad news from Gabon confirms that without a global commitment, great elephant populations will soon become a thing of the past,” WCS President and CEO Cristián Samper said in the statement. “We believe that elephants can still be saved – but only if nations greatly increase their efforts to stop poaching while eliminating the illegal ivory trade through better enforcement and reduced demand.”

Poachers have had an enormous impact on Africa’s elephant population. The Born Free Foundation estimates that nearly 32,000 elephants across Africa were lost to poachers in 2012. The continent’s total elephant population was around 1.3 million in 1979, but the number had fallen to around 470,000 by 2007.

On January 28, Gabon authorities and Conservation Justice law enforcement made a “high profile ivory-related arrest,” according to a Born Free Foundation statement. Officials conducted an undercover investigation, which lead them to several traffickers boarding a ship traveling to Nigeria. They seized 18 tusks that weighed 178kg as they were being smuggled aboard, according to the statement.

There’s a lot to gain and little to lose for many who engage in the ivory trade in Gabon. High demand for ivory makes it an appealing way to make money, and the repercussions are slim. Currently, Gabon punishes poachers with a maximum of six months in prison and a fine between £130 and £13,000.

“Over the last three years we have deployed 400 additional parks staff, 120 soldiers and 30 gendarmes in our fight to stop illegal killing of elephants for the black market ivory trade,” Head of Gabon’s National Parks Agency Lee White said in the WCS statement. “Despite our efforts we continue to lose elephants every day. If we do not turn the situation around quickly the future of the elephant in Africa is doomed.”

In centuries past, ivory was a luxury commodity traded on markets around the world. However, explosive human population growth and excessive hunting reduced the population of most of the world’s elephant species to endangered status by the late 20th century.

A sharp decline in elephant population prompted the international community to regulate ivory trade through the Convention on International Trade in Endangered Species of Wild Fauna and Flora (CITES). Anyone attempting to import or export ivory must obtain a CITES permit.

Since traffickers can’t legally import and export ivory acquired from poaching, they have to transport their merchandise in secret. While some shipments make it through undetected, this was not the case in January when Agri-Food and Veterinary Authority (AVA) and Singapore customs intercepted hundreds of concealed ivory tusks from Africa.

“Acting on a tip-off, AVA and Singapore Customs conducted a joint inspection on a shipment that was declared as ‘waste paper’ on 23 January,” Gerald Neo, Executive Manager of AVA’s Quarantine & Inspection Department said in a statement. “We found 1,099 pieces of raw ivory tusks packed in 65 gunny sacks.” 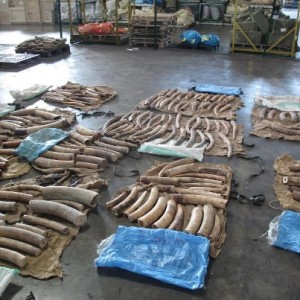