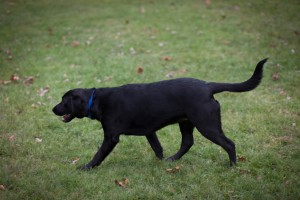 The birth of one ordinary dog could open the path to survival for endangered canine species like the American red wolf. Klondike, a nine month old beagle-Labrador retriever mix, started life a bit colder than most pups. He was conceived through the artificial insemination of an embryo that was frozen before being placed inside a surrogate mother.

Klondike’s birth is part of a new frozen embryo research program sponsored by the National Institutes of Health Baker Institute for Animal Health of The College of Veterinary Medicine, according to a Cornell University statement.

The Significance of Klondike’s Birth

Cryopreservation and artificial insemination aren’t new concepts, so what’s the big deal about this one?

When it comes to freezing embryos and sperm, doing it one or two times just isn’t enough. Animals are incredibly diverse, and so are their reproductive processes. Developing a reliable procedure to assist in the reproduction of a single species isn’t a simple matter of copy-pasting old techniques.

“Reproduction in dogs is remarkably different than in other mammals,” Alex Travis, Baker faculty member and Director of Cornell’s campus-wide Center for Wildlife Conservation, said in the statement. “We’re working to understand these differences so we can tackle issues ranging from developing contraceptives to preserving the genetic diversity of endangered animals through assisted reproduction.”

Since the techniques are being developed with the conservation of endangered species in mind, the procedure needs to be as safe and effective as possible. Some species may not get a second chance if an attempt to conserve their gene pool fails.

The red wolf is an American species that ranks among the world’s most endangered canines. It was classified as an endangered species in 1967. Embryo cryopreservation is one of several techniques that can help bolster the staggeringly low population of red wolves. There are about 100 wolves in the wild and 200 in captivity across North America, according to the U.S. Fish and Wildlife Service Red Wolf Recovery Program.

From Black-Footed Cats to Red Wolves

Klondike may have been the first canine born from a frozen embryo in the Americas, but he’s not the only animal who has been through the cryopreservation process. Two kitties became the first of their kind to be born from frozen embryos in February 2011 at the Audubon Center for Research of Endangered Species in Louisiana.

The two black-footed cats were frozen as embryos for nearly six years before being transplanted into a surrogate mom. These unique kitties are members of one of the world’s smallest breeds of wild cat. Native to South Africa, there are only about 20 of them in captivity in the United States and 40 around the planet total, according to an Audubon Nature Institute statement.

“The science of assisted reproduction for endangered species has come a long way in the past fifteen years, but every time we can point to another ‘first’ in the field it gives us hope,” Audubon Nature Institute President and CEO Ron Forman said in the statement. “We are proving this science works and that we can provide hi-tech options for many different species as the situation grows more and more critical for wildlife across the globe.”

Animals with small populations, like the black-footed cat and red wolf, face a significant obstacle on their road to recovery as a species: lack of genetic diversity.

If their total population spikes low enough, there won’t be enough variety among the survivors’ genetics to create healthy generations in the years to come. Embryo preservation is one of the techniques that researchers and conservations hope will ease the problem.