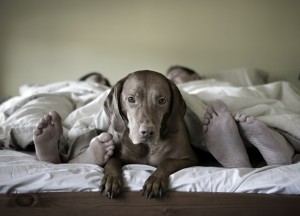 More than half of Britons let their pet sleep on their bed, according to a new study, while almost three-quarters allow their animals to share the bedroom.  One out of every three pet owners in Briton admits they would rather sleep with their pet then their partner.

There are inherent draw backs to having the family pet sleep in your bed as they tend to twitch, snore, and wiggle.  71% of pet owners who let their pets sleep in their bed say they are woken frequently but many say it’s ok by them.
Many pet owners claim they simply want to help their pets get a good night’s sleep.  Cats tend to lead dogs as the pet of choice to sleep with.  Some pet owners that are even allergic to cats still prefer to have them in bed with them.

Ikea, in response to Britain’s sleeping with their pets, has created in-store models of pets so customers can ensure that their new mattress will accommodate them and their animals.  The “crash test doggy” and “crash test moggy” or cat, are currently being trialed and could be rolled out across the UK.

Even with all the popularity of pets sleeping with their owners, not everyone agrees that pets should be allowed to become sleeping companions.  Elaine Pendlebury, senior vet at the PDSA veterinary charity, does not recommend sleeping with a pet.  She cautions that animals can carry diseases and that it can be transferred to humans, including ringworm or an upset stomach.  She said dogs and cats actually like having their own territory and knowing their position within a household.