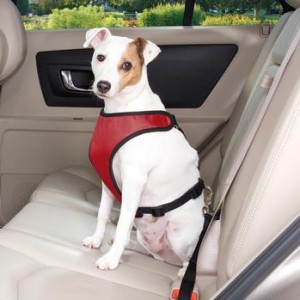 New Jersey recently joined the list of States that regard unrestrained pets in a car as dangerous to humans in the car as well and other drivers.  In a 2010 survey by AAA, 20 percent of participants admitted letting their dogs sit on their laps while driving.

Not everyone agrees with the New Jersey law that involves fines ranging from $250 to $1,000.  Many people believe this is a waste of resources.

Regardless of whether you agree with the new pet restraint laws or not, all across the country states are beginning to create laws to protect drivers and their pets.  “You wouldn’t put your child in the car unrestrained, so you shouldn’t put your pet in the car unrestrained, either,” said Col. Frank Rizzo, superintendent of the New Jersey Society for the Prevention of Cruelty to Animals, or NJSPCA.  “What people come to realize only too late is that animals act like flying missiles in an impact and cannot only hurt themselves but hurt their human family members, too,” Rizzo said.

In Hawaii, you are not allowed to drive with a pet on your lap.  Other states like Maine, Connecticut and Arizona have distracted-driver laws that officials can use to charge those that drive with pets on their laps.  Rhode Island is considering adopting a distracted-driver law to deter pet owners from holding their pets while driving.  According to AAA, looking away from the road by being distracted for only two seconds doubles your chances of getting in an accident.

The good news is that pet restraints are fairly inexpensive and may save the life of your pet as well as your life in the event of an accident.  “Pet restraint is a somewhat emerging issue,” AAA spokeswoman Heather Hunter said.  “While some states do have legislation in place, there is much more to be done regarding tracking of these laws, filling gaps in states that do not yet have laws, and education on the importance of restraining pets in moving vehicles to protect the pet and all family members.”