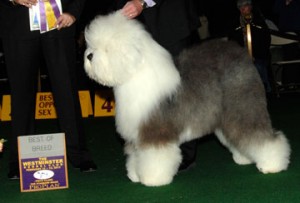 Swagger, a 20 month old Old English Sheepdog, is one of the contenders for the 137th Westminster Kennel Club dog show’s Best in Show title. A late entry to this year’s contest, he has only been in three shows, but has quickly emerged as a crowd favorite. Due to a rule change, dogs that have not won the number of shows required by the American Kennel Club to be deemed champions were allowed to participate this year. This gives Swagger, with his fluffy white and gray cloud of fur, the opportunity to compete. Swagger, a herding dog, won his category’s Best in Group title, and he will compete against six other finalists for the coveted title of Best in Show.

The Westminster Kennel Club dog show is an annual, two-day event. Dogs competing in the show number more than 2,700, and they come from all over the world. Each of the 50 U.S. states will be represented in the competition, in addition to more than 100 competitors from other countries, including France, Japan, and Brazil. The Best in Show title is the highlight of the competition, and it is held on the final night of the show, as winning dogs from each category compete against each other for the top title.

Another competitor for the title of Best in Show is three year old Kiefer, a Labrador retriever. The American Kennel Club statistics on registration indicate that Labradors have been the United State’s most popular purebred for the past 22 years. Despite the popularity of the breed, a Labrador has never won Westminster’s Best in Show title. Fans of Kiefer are hoping that this will be the year for the Labrador, a breed known for being ideal for families with children, as well as for their use as guide dogs for blind people and their work in law enforcement operations, primarily search and rescue.

Despite their friendly dispositions and lovable natures, many don’t view the Labrador retriever as a true contender for Best in Show. Some reason that the friendly Labrador’s sturdy build and goofy disposition, making it such a hard working and companionable pet, are responsible for the breed’s inability to obtain the elusive Best in Show title. The title typically goes to a breed that is more sleek and flashy rather than big and lovable. Regardless of his odds, Kiefer is well on his way to the title after having won Best of Breed in his competition against 53 other Labradors.

Swagger and Kiefer will be competing against several other dogs for Best in Show. One competitor will be the winner in the hound category, Jewel, an American Foxhound bounding with energy and athleticism. Another competitor will be Banana Joe, the winner of the toy category. Banana Joe is a tiny black Affenpinscher, and has also proven to be a fan favorite. The winner of the non-sporting group, Honor, will also be competing for Best in Show. Honor, white and fluffy, is a Bichon Frise.

And the Winner is 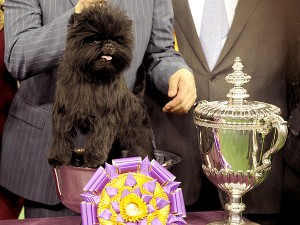 This years best in show award goes to Banana Joe! The tiny black Affenpinscher was the first of his breed to take the top honors at the show. Joey, as he is affectionately called, turns 6 years old next month and will retire following the show. Not a bad way to go out.