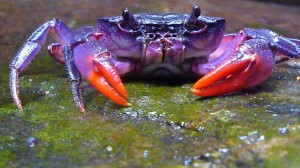 Biology and taxonomy still has its wonders for those who look hard enough. Researchers at the Senckenberg Gesellschaft für Naturforschung (SGN) in Frankfurt announced the discovery of nearly 500 new species in a January 25 media statement. The organization’s research team was busy locating and describing the new species throughout 2011 to 2012. They recently revealed the results of their work, including pictures of some of the more exotic finds.

A purple crab and mustard-colored frog are among the most colorful of the 491 new species found by the Senckenberg researchers. Land dwelling organisms made up the majority, with only 75 of the new species hailing form ocean habitats.

Over half of the new species are from the Asian continent and roughly 100 are natives of Europe. The 30 plant species on the list were only a fraction of the total. Over 300 of the species belonged to the arthropod taxonomical group. The anthropoda phylum encompasses a diverse collection of organisms, including crabs, spiders and insects.

“The objective always is to record and preserve the diversity of life on earth, in other words, biodiversity,” Senckenberg Director General Prof. Volker Mosbrugger said in the statement.

While 404 of the newly described species are still living, 87 of them are long gone. Rain forests, tundra and ocean floors are all taxonomical frontiers where all manner of strange organisms dwell, but some of the Senckenberg finds came from “familiar” fossil collections. The discovery of new species among fossils is attributed to updated research methods and evaluation of previously unidentified material, according to the statement.

While many taxonomists don’t need any extra incentive to seek out new species, one of the biggest benefits of describing organisms is the ability to protect them in the future. Dozens of animal species go extinct every day, so there is a little pressure on scientists to find them before it’s too late.

“Taxonomy also serves to protect animal species,” Dr. Peter Jäger, arachnologist at Senckenberg, said in the statement. “Only those who know the species variety can develop the necessary protection programmes.”

Jäger was part of the Senckenberg team that set out to describe new species over the last few years. He discovered 46 new spider species during 2011 and 2012.

Senckenberg is no stranger to discovery. Home to six research institutes and several natural history museums, their researchers have discovered over a thousand new species during the last five years.

The recent finds add to an impressive track record, but the list of new species is just a drop in the ocean compared to the diversity of organisms on the planet. Scientists estimate the Earth’s total number of species to be between 3 and 100 million, so there are still plenty of new finds for researchers to look forward to.