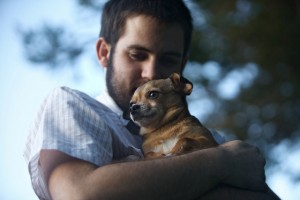 NEW YORK (AP) – Most people are not given a choice when it comes to giving up a pet.  In fact, it can be one of the hardest things a pet owner would have to do.  Maybe that’s the reason for the 14 percent of people who would choose to give up their significant other instead of their long time furry friend, as recently indicated by an AP-Petside Poll.  The poll, conducted in October 2010 by GfK Roper Public Affairs and Corporate Communications, involved the random landline and cell phone interviews of 1,501 adults nationwide, of which 1000 were pet owners.

Unmarried people are 25 percent more likely to choose their pet over a relationship, as discussed in the article written about results of the poll.  Fidel Martinez, faithful owner of mixed breed rescue dog, Killer, said, “I would absolutely give up my girlfriend for him.  I know it sounds insane but I’ve had numerous relationships with women.  My dog has never let me down.”  Martinez has been with his girlfriend for 4 years, but Killer has been his best friend for seven.  Makes you wonder what you have to do to hold on to your significant other if they have a pet, huh?  Resident of Omaha, Ne, Sally Roland, also falls into the 14 percent who would choose their pet over their mate.  She jokes, “I’m divorced, so that might explain it!”

Not surprisingly, 40 percent of the females interviewed found it more difficult to make the decision of choosing between their spouse and their pet, the article goes on to say, with only 26 percent of men indicating it would be a hard choice to make.

Another possible cause of the staggering 14 percent of people willing to give up their significant other could be due to the many reported health benefits of owning a pet.  If your mate provides you with grief and instability, it’s not surprising that some would choose the undying devotion of a pet, especially among the elderly.  According to the Centers for Disease Control and Prevention, owning a pet has been shown to decrease blood pressure, cholesterol and triglyceride levels, and helps to alleviate the feelings of loneliness and depression symptoms.

After seeing the results of the AP-Petside Poll, I can’t help but wonder what all of you reading this article have to say.  Would you give up your significant other for your pet?