You can’t go anywhere these days that hasn’t already been captured by one of the hordes of Google StreetView cameras. This type of infiltration is wonderful for our navigating whims, but is it wreaking havoc on the wild animal kingdom?

Fox News Accuses StreetView of Running Over Donkey in Botswana 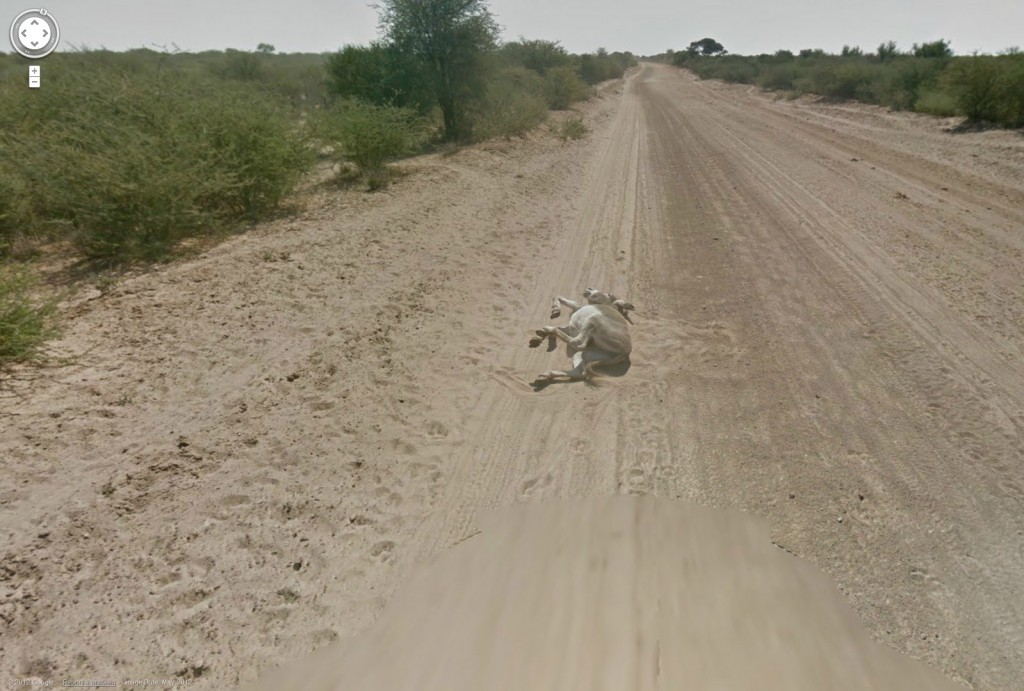 This past month, Fox News discovered a picture (shared through Twitter) of a donkey lying on the road in Botswana, The image was captured by a Google StreetView camera, which also captured the donkey standing by the road in a different image. The images can lead people to believe that the camera captured the donkey standing upright (before being run over) and then laying in the road (shortly after being run over).

Fox News suggested it possible that one of the rear-facing cameras on the streetview camera car captured the image of the donkey, having just been run over by the Google car.

The worst of it was that there was no evidence that the Google StreetView Camera driver stopped to tend to the animal, nor report the incident to authorities. The car just continued on its way.

Google claims that Fox News, and others, has it all backwards … literally. Google alleges the donkey was lying in the road as the streetview camera car approached, then it got up and walked away as the car drove past.

One issue with Google’s claim is that the images captured suggest that, if Google is honest about not hitting the donkey, then this particular Botswana donkey is quite the unique fella.
1. The donkey would have had to be one quick devil to have moved from a laying-down position in one camera shot to standing upright in the road in the next shot.
2. The image of the donkey upright does not show any prints (left by the donkey) or impressions by the car. This leads one to believe that the Google car had yet to drive down the road, thus debunking their argument (unless donkeys walk backwards, which they don’t).
3. There is a swirl of dust flying up from the donkey as he lay on the ground, suggesting the camera captured this image as the animal fell down from impact.

One piece of evidence in favor of Google 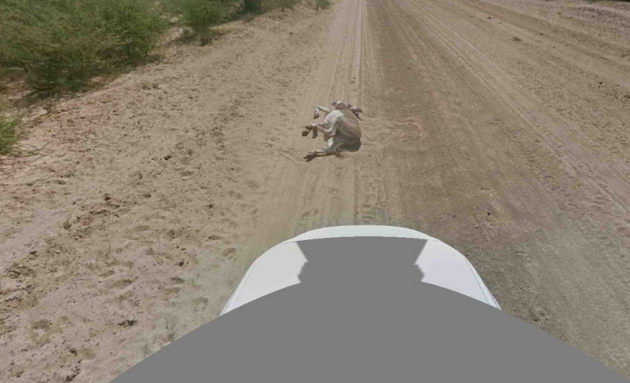 With all that being said and done, there is one piece of evidence that proves Google’s claim. The image of the donkey, on the ground, includes the front-end of the streetview camera car, meaning the car approached the donkey as it lay on the ground.

“As our imagery shows, the donkey was lying in the path – perhaps enjoying a dust bath – before moving safely aside as our car drove past,” Google posted on its official streetview blog.

This isn’t the first time Google streetview cameras captured more than they bargained for. In 2009, a deer was captured running in front of a Google car; the next image showed that same deer sprawled on the side of the road. Google apologized at the time, explained that the driver had contacted authorities immediately, and the deer was able to hobble off the road on its own.