There are over 200 million more olfactory receptors in a dog’s nose than a human’s. Dogs have been trained to locate everything from drugs and contraband to missing people and endangered species for their masters. Their sense of smell is so acute that they can predict seizures in epileptics, as well as detect cancer. Still, finding 600 year old, buried human bones with absolutely no traces of flesh left on them seems to be asking a lot of that sniffer… or so you would think. Migaloo, the world’s first archaeology dog, disagrees. 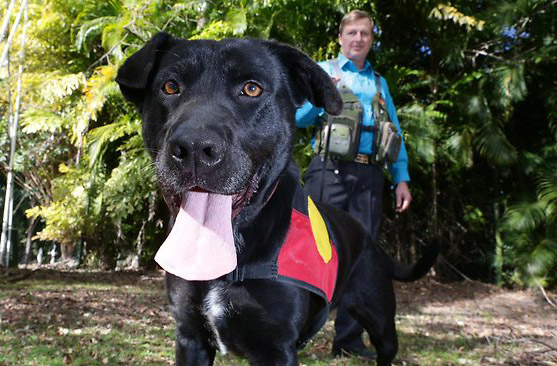 Migaloo is a Labrador retriever cross that was rescued in Australia by owner Bud Streten, a director for Red Centre Consultancy. Recognizing her high drive and desire to work, Bud brought her to trainer Greg Jackson. He had previously trained canines for detection of cadavers, drugs, bombs, and quoll (an Australian marsupial). The decision was made to train her to find ancient bone fragments.

Archaeological digs are very expensive and can result in a lot of labor and money spent with no return. At this time, there is no equipment that accurately identifies bone fragments beneath the soil. You have to dig to confirm their presence. This is also true of Aboriginal sacred burial sites. There is no way to prove the presence of a grave without disturbing it by excavating. Given these expenses, Migaloo may prove a serious money-saver for archaeologists and also a friend to the Aborigines seeking to protect traditional burial sites.

There were many skeptics but Jackson and Migaloo trained for six months using bone fragments loaned to them by the South Australia Museum. When they were sure she could locate bone fragments 100% of the time, they completed a final test: Migaloo was turned loose on an acre of land that was known to contain a 600 year old, Aboriginal burial site. The Aborigines and officials present knew where the grave was but Jackson and Migaloo had no idea and there were no indicators. Within two minutes, Migaloo began to give her signal for a find. The officials confirmed she had found the burial site. Prior to this, the oldest bone find by a dog occurred over 25 years ago when Candy and her owner Bill Tolhurst located bones at an 1812 Battle of Snake Hill site in Fort Erie, Ontario, Canada.

What’s next for Migaloo? She will be travelling around Australia assisting Aboriginal tribes in locating sacred sites. She is also considering a trip to France and Belgium where she would work on finding remains from unmarked World War II battlefields that have been turned into farmland. Jackson would like to expand on her training to teach to Migaloo to identify pottery shards and fossils. He also sees potential for future archaeological dogs to work cold cases to find human remains. Migaloo is just the beginning.