Home Exotic Pets News Do Not Keep Turtles as Pets; Report Explains Why 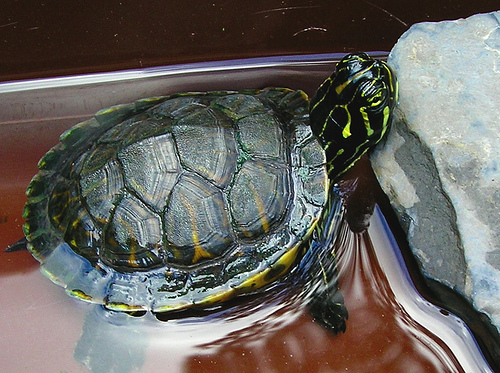 When you are looking for an alternative to a dog or cat as a pet, turn to animals such as rabbits, hamsters, guinea pigs, or even fish, but NEVER bring a pet turtle into the home.  In case you didn’t know, the United States has actually banned the sale of pet turtles that are less than 4 inches in size back in 1975, but somehow that hasn’t stopped children from owning them.  The number one reason why you should not have turtles as pets is that they are at an extremely high risk of carrying salmonella.

A report published by the Center for Disease Control (CDC) warns that having pet turtles puts children, the elderly, pregnant women, and those with weak immune systems at a high risk of contracting salmonella.  The report goes on to say that between August 2010 and September 2011, there were 132 human salmonella infections across 18 states, although no deaths were reported.

The CDC explained that the illegal sale of turtles still happens at places like flea markets and fairs, which continues to expose children to the harmful dangers of salmonella.  Symptoms of salmonella poisoning include lethargy, diarrhea or bloody diarrhea, fever, vomiting, decreased appetite, and abdominal pain and can spread from humans to other pets in the home.

Salmonella are naturally occurring bacteria in turtles and those that have it usually do not appear sick at all.  In addition, turtles do not shed salmonella all of the time.  So, just because a turtle might have one negative test for it doesn’t mean that they are not infected; it could mean that the turtle was not shedding salmonella on the day it was tested.

Other animals you shouldn’t have as pets include frogs, toads, newts, and salamanders, because they can also transmit salmonella poisoning.

There are a few things you can do to prevent the contraction of salmonella including:

The best way to help lessen the chance of salmonella contamination is to help spread the word and enforce the pet turtle ban.