Home Animal Welfare Considering a Pet Hedgehog? You May Want to Reconsider 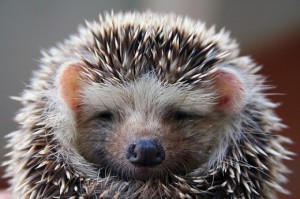 Some people find pet hedgehogs absolutely adorable. So cute, in fact, they’re adding the small mammals to the list of favorite pets. But with recent findings indicating a link between these prickly critters and a strain of salmonella bacteria it may be best to reconsider the addition to your family.

A hedgehog is a small animal known for its prickly, stiff quills. When in nature they often live in hedges (hence the name) and roll up into a ball when they need to defend themselves. Cute without question, more and more people these days are choosing pet hedgehogs instead of a cat or dog. They are native to New Zealand and Europe, though they are commonly seen in the United States as well.

The Centers for Disease Control and Prevention released these findings earlier in the year, stating that the number of such cases seems to be growing rapidly in numbers. Previously only one or two such cases were reported. Now, there is a total of 18 cases — enough to raise concern.

The CDC recommends that families choose another pet that carries less risk of disease. Additionally they suggest that all individuals who are in contact with a pet hedgehog wash their hands after handling the mammal, their cages or any equipment the hedgehog has touched. The cages of the hedgehog should also be cleaned on a regular basis. Should you decide to bathe the hedgehog ensure that you use a plastic tub or bin. It is never a good idea to use your sink or bathtub for this encounter.

Children under the age of five, as well as the elderly community and those who have a weakened immune system, are at the highest risk for developing the hedgehog related salmonella poisoning.

Have you been affected by Salmonella?

Symptoms of salmonella poisoning include fever, abdominal pain and cramps and diarrhea. These symptoms occur 12 to 72 hours after the infection has occurred. The rare strain of the disease found in hedgehogs carry the same symptoms as other strands. If you feel that the disease has affected you, seeking medical treatment as soon as possible is a must.

In addition to hedgehogs there are several other pets that carry the risk as well. These pets include guinea pigs, hamsters, chicken, frogs, lizards, turtles, snakes, turkey, duck and geese.

The pet hedgehogs responsible for the illnesses during the past 12 months were all purchased from licensed breeders located within the United States. Never wrongly assume that because you’ve purchased the animal from a licensed breeder that you are 100% safe from salmonella poisoning.