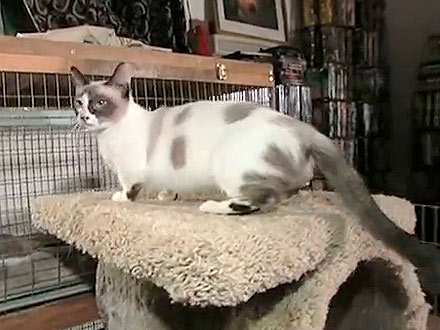 Cats do more than lay around, eat, sleep, and play on their own terms.  They bring a certain rewarding feeling to their owners, especially when they do something so special or unique that it lands them in the Guinness Book of World Records!  From the loudest purr to having two faces, there are quite a few cats that have become famous in their own ways.

Let’s start with the domestic cat that earned recognition in the Guinness Book for having the loudest purr.  Her name is Smokey and she is a 12 year old British short-hair whose purr was recorded at 67.7 dB.  How loud is that?  Well 90 decibels is what you would expect from a lawnmower or a hairdryer, so 67.7 is pretty loud, about what a vacuum sounds like.  Ruth Adams, Smokey’s owner, said, “It can be annoying if her purring starts as you are watching television and it has reached a romantic bit in a film, because it’s impossible to hear and spoils the moment.  It’s also a struggle to have telephone conversations.  When I’m on the phone friends often ask what the loud noise is and they can’t believe it is coming from a cat.  I don’t know why she does it.  She’s very happy and content, just very loud.”

Here’s a video of Smokey doing what she does best:

A cat from California has earned the title ‘Shortest Living Cat’ due to her legs only being 6 inches tall!  Her name is Fizzgirl and she is part of the Munchin Cat Breed.  She is often mistaken for a kitten because of her size but is actually an adult who can jump and climb just as high as average height cats.  Tiffani Kjeldergaard, owner, says “Fizzgirl knows that she’s short, but she has no problems climbing and getting to the highest places in the house.”  She goes on to describe the cat as a ‘princess’ but also a very loyal and loveable companion.

Probably the most unique and rare cat in the world, Frank and Louie not only has two names, but two faces, two noses, two mouths, and three eyes.  You wouldn’t expect an animal born with this kind of genetic defect to be able to survive very long, but Frank and Louie proved everyone wrong by turning 12 years old on September 8, 2011.  He has since then found himself in the Guinness World Records as the longest living Janus cat, a group named after a Roman god with two faces.