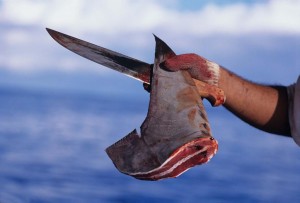 Shark fins may become an illegal commodity in the Texas if a recently proposed bill becomes law. The Humane Society of the United States (HSUS) expressed its approval of Bill 852 (H.B.852), which was sponsored by state Representative Eddie Lucio and Senator Larry TaylorHouse, in a February 15 statement. If the legislation does pass, Texas will join California, Hawaii and a handful of other states to ban shark fins from the market.

“HB 852 and SB 572 will put the state of Texas in line with other coastal states in our nation by eliminating the market for shark fins here, and will end our state’s involvement in the highly destructive global shark fin trade,” said Katie Jarl, Texas state director for The HSUS, in the statement. “The Humane Society of the United States is thankful for Rep. Lucio’s and Sen. Taylor’s leadership on this important issue.”

How Sharks Lose Their Fins

Wasteful and cruel are two words that accurately describe the practice of finning. The demand for shark fins vastly outweighs the need for shark meat, so many fisherman don’t bother with keeping the entire thing. After catching one of these large aquatic creatures, they sever the fin and throw the body back into the water.

Even if the shark survives the ordeal, it will eventually die from the injury. Bleeding attracts predators and sharks rely on their fin to move around in the water.

So, what makes the fins worth so much that fisherman would kill an entire shark to get one?

Broth made with the fins is a popular dish in Asian cultures. Tens of millions of sharks are killed each year to keep up with the demand for shark fin soup, even though finning is illegal in the United States, European Union and other parts of the world, according to the HSUS statement.

The Dangers of Finning

There are a lot less sharks out there than there were 30 years ago. Some populations of blue shark have fallen nearly 80 percent over the last few decades, according to a March 2012 Planet Earth Online article. The dramatic decline in shark numbers leaves little doubt among researchers that the practice of finning is simply not sustainable.

“Shark populations are plummeting worldwide and Gulf shark populations are also at serious risk from the illegal shark fin trade,” Shark Stewards director David McGuire said in the statement. “Reducing consumption and the trade of shark fins in Texas will help protect sharks, Texas marine ecosystems and the health of fisheries for the future.”

Sharks are pretty much at the top of the ocean’s food-chain, which makes them incredibly important for maintaining balance in marine ecosystems. They keep populations of fish in check, which in turn keep other organisms from getting out of control. The absence of a significant predator can have a disastrous domino effect in any ecosystem.