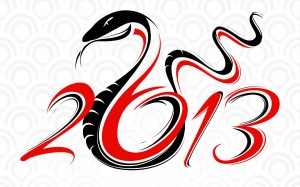 Snake people are said to be charming, popular and recognition-seeking. They love to be at the center of attention. In the case of the animal, most snakes live solitary lives. Some snakes, such as rattlesnakes, do form groups, particularly during hibernation periods. Females are definitely charming and popular though. Many snake species, including common garter snakes and gigantic anacondas, form mating balls around receptive females. Humans tend to find snakes fascinating as well. We have a love-hate relationship with the reptile that spans our literary history. We blame them for our downfall and seducing us from the Garden of Eden. We refer to double-crossers as “real snakes”.

Those born in the year of the snake are also considered shrewd, cunning and clever. Their reptilian kin are undeniably one of the shrewdest hunters of them all. Many snakes use camouflage to hide themselves from their enemies and their prey. They may ambush their prey, laying in wait until the hapless animal comes along.

People born in snake years are expected to be graceful, elegant, dark and potentially vicious. Love them or hate them, there is no denying the elegance of a real snake. With their sinuous movement, they move through the water with barely a ripple marking their passing. We find their skins so entrancing that we use them or mimic them when creating accessories like expensive shoes and handbags.

Large families are another trademark of those born in the year of the snake. In the wild, snakes have litters that can range from a single baby to 40 or more, depending on species. So, it`s hard to come to any real conclusions about family size. Likewise, their money lending skills and status as philosophers and deep thinkers may be harder to evaluate.

It is considered an added blessing for those born in the year of the snake to be born during hot weather. This can only be considered a bonus for the cold-blooded reptiles as well. They need the sun’s energy to warm their bodies and many snakes that live in colder climates will hibernate through the winter months.

The Chinese zodiac is very interested in how people born in different years relate to one another. In the case of the snake, oxen are good while they generally don`t get along well with rats and roosters. In nature, most oxen are safe from all but the biggest snakes and even then they are unlikely to be targeted as prey. Rats and rooster on the other hand…

Valentine’s Day Gifts for Dogs that Show Them You Care

Do Not Keep Turtles as Pets; Report Explains Why

Change Made at Pet Care Trust Will Spark Positive Impact