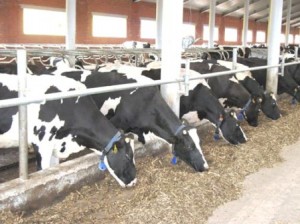 A New Zealand dairy farmer was sentenced, this month, to two years and one month for what’s being described as “serious animal welfare offenses.”

Dairy Farmer Lourens Barend Erasmus was sentenced in connection to abuses made on his dairy cows. Specifically, the Ministry for Primary Industries (MPI) of New Zealand discovered that Erasmus had been breaking his cows’ tails (115 of his 135 cow herd), and beat the cows with steel pipes and milking cups.

While Erasmus’s sentence provided a message to would-be abusers, there are still many out there, including farmers, who continue to mistreat their dairy cows.

This past October, five Idaho dairy farmers were charged with misdemeanor cruelty to animal charges for violently hitting, stomping on, and punching cows in the face and body. The owners of Bettencourt Dairies, the farm these five worked at, publicly stated they were appalled by these actions and have since installed video cameras.

Stories such as this, with repercussions being no more than misdemeanors (and, hopefully, loss of job) are far too common. But roughing up a cow is just the tip of the iceberg.

The abuse of dairy cows is not rare. Mercy for Animals has a video called Dairy’s Darkside that focuses on New York’s largest dairy farm. An MFA investigator recorded these acts in 2009. The video captures the following abuses:

Mercy for Animals claims that the vast majority of dairy cows in the US live in similar conditions as what is portrayed in this video. While many people understand that dairy cows live in confined areas and aren’t happily grazing amongst acres of pastureland, it’s likely severely disturbing to learn that farmers, the people whose job it is to nurture and care for these animals, are oftentimes responsible for unnecessary abuse.

A change is a’ coming?

While the fight against livestock abuse has a long way to go, there are influential people and entities doing what they can to make a change. This past year the National Milk Producers Federation publicly opposed tail docking. This was a change from a 2009 stance that stated they didn’t recommend the practice.

A 2006 Colorado State University study found that 82% of farms in the Midwest and New York practiced tail docking, whereas 11% of California cows had their tails docked. States such as California have since banned the practice.

A price to pay for milk

Milk isn’t going anywhere anytime soon. No one thinks it is. The question isn’t whether one should drink milk – that’s anyone and everyone’s right. The question is, do cows need to suffer the way it’s shown in Mercy for Animals’ video? While the image of a “happy cow” may not ever come to fruition, due to costs, space, and so much more, do cows really need to be kicked and beaten? Is that the price we pay for milk?