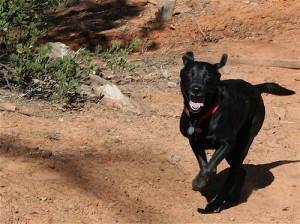 Much research has been done on migratory animals. Birds, turtles, and various insect species, are all known migrators. They use combinations of magnetic fields, olfactory cues, position of the sun and even the stars in their journeys. However, this research tends to leave out other species. More specifically, there have been many reports of cats and dogs that find their way home over hundreds of miles of unfamiliar terrain. Mostly anecdotal, they have been difficult to substantiate with actual proof. The latest entry in the category is Holly, a four year old tortoiseshell cat, and there is definite proof that she made the journey although scientists remain baffled as to how she navigated the two hundred mile trip.

Holly’s owners, John and Bonnie Richter, were attending an RV rally in Daytona Beach, Florida when she went missing last November. They searched and searched but there was no sign of the cat and they ultimately had to return to their West Palm Beach home. Nearly two months later, on New Year’s Eve, a very emaciated and weak tortoiseshell cat wandered into a backyard less than a mile from their home.

Other cats have been reported to make similar trips. They include a Russian tortoiseshell named Murka, who is believed to have travelled 325 miles from Voronezh to Moscow in 1989. Howie, an indoor Persian, was left with family relatives in 1978 when his owners went on vacation. While they were away the cat went missing. A year later he turned up at his home, over a thousand miles away.

Although very few studies have been done on cats and their navigational skills, there are some. One, a German study in 1954, placed cats in a circular maze with exits every fifteen degrees. The majority of the time, they exited in the direction of home but no one had any firm ideas about how they knew what direction home is. Feline behaviour is known to be very complex as recent studies with Kitty Cams attached to cats allowed outdoors have revealed. It has been hypothesized that they have mental mapping skills that may assist them in returning home. Unfortunately that doesn`t explain how they return home if they have not previously explored the area. Olfactory cues also do not explain the longer trips although shorter trips across town may well be the result of a combination of mapping skills, olfactory cues and sheer luck.

While it is always heartening when a beloved pet makes its way home after an arduous journey it is important to remember that the vast majority of lost pets never find their owners again. For this reason permanent forms of identification such as microchips can mean the difference between a lost pet and the one that is returned safe and sound to its home.