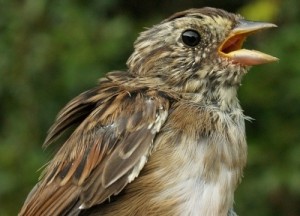 Deep in the heart of a male swamp sparrow, lurks an aggressive bully. Swamp sparrows are commonly found across eastern North America in wetlands. These tiny little birds that flit away at the slightest motion from you are actually so antagonistic to other swamp sparrows during mating season that they will fight to the death. Recent studies conducted by Rindy Anderson of Duke University have revealed that they do their best to intimidate their opponents in a combination of vocal prowess and waving of the wings. It’s the avian equivalent of daring the other bird to take you on.

Aggressive bird behavior is not a new observation. Many species are known for going after their fellow birds and even people and hang gliders that get too close to their nests. Northern Shrikes will impale their prey on thorns to save them up for a later meal. Bellbirds put poisonous insects in their nests to deter would-be thieves and frigate birds will steal from weaker birds. In the case of the swamp sparrow, they will attack one another with claws and beaks and can do serious, sometimes fatal, damage to one another.

It stands to reason that they would want to avoid fighting as much as possible to limit the risk of injury. Observers have witnessed males waving their wings at one another in combination with singing. They raise their wings and shake them ever so slightly – a bit like the royal wave. The question Anderson wanted to investigate is: does the wing wave play a part in the display or is it separate from the song. To test their theory they created a robotic bird, dubbed by the media as a “Frankensparrow”. Using a deceased swamp sparrow, they placed robotic parts inside that allow the bird to wave its wings and twist from side to side. The researchers wanted to gauge reactions to the robotic sparrow when it was still, in motion but not waving its wings, and when it wing waved. They brought the Frankensparrow to breeding grounds in Pennsylvania, placed him in territories of other males and watched what happened.

It turns out that wing waving is definitely a provocative act; particularly if combined with song from a nearby speaker. Birds responded by doing their own wing wave back before deciding if it was worth a fight. There are degrees of aggression in the sparrows with some being wimpy, and departing upon seeing the robotic sparrow wing wave in response to their display, while others are more aggressive and will take the challenge to a fight. This response seems to be ingrained and the live birds did not vary from their response to challengers. Macho birds stay macho and the wimps flee.

What did surprise researchers was the wing waving response of birds to the robotic bird. Regardless of whether the Franksparrow stood still, twisted or waved its wings a specific number of times, the live bird always responded with the same number of wing waves. This may indicate that the behaviour is consistent individually regardless of the degree of threat provided by the other bird. Further studies will be done once the Franksparrow has recovered from his ordeal – one attacking sparrow tore his head off.