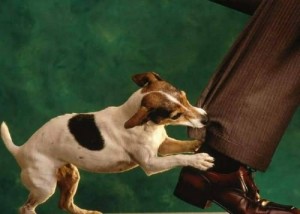 One of the worst feelings as a dog owner can be knowing that your precious pet has bitten someone, especially if it was serious and has caused major harm.  As the person who was bitten by a dog, it can be a traumatic event that depending on the seriousness of it, can lead to lifelong complications.  Although fatalities are rare, more than half a million people a year, mostly children, require hospital treatment for dog bites, according to the American Veterinary Medical Association.  Just last year, it was reported that 30 people died from dog inflicted bites.  There are ways you can prevent a possible dog bite by simply watching for signs and knowing what to do if you see them.

“It’s very important for parents to teach children how to behave around dogs without frightening them,” says Dr. Pamela Reid, vice president of the Animal Behavior Center for the American Society for the Prevention of Cruelty to Animals.  “Part of it is teaching a child appropriate behaviors around dogs, and also teaching a child what to look for, what to watch for, interpreting the body language.  That’s a little more difficult.”  Even as adults, it is extremely important to watch for the possible warning signs that a dog is about to bite and avoid any harm.

Possible indicators that a dog is about to act in a defensive manner are:

The Eyes – Pay close attention to a dogs eyes, as they tend to either get larger or smaller when showing signs of distress.  Their eyes can display signs of fear, excitement, and even show you when it is feeling threatened.

The Ears – If you see the dog has erect, forward-pointing ears, it can mean he is being attentive or contemplating an attack, while ears back and flattened may indicate fear or submissiveness.

The Mouth – A dog with a closed mouth that looks rather tense can be an indicator that it is feeling threatened and getting ready to bite.

The Tail – If a dogs tail is standing at attention, it can be a sign of getting ready to attack or bite.

Body Language – Most dogs will give some indicator that they are getting ready to bite by showing their teeth, growling, snarling, which are the more obvious signs, to simply showing an increase in the tenseness of their face.

Learning these ways of noticing signs of a dog getting ready to bite or attack can potentially save you from making a huge mistake when it comes to approaching or being approached by an unfamiliar dog.  If you are bitten by a dog, immediately wash it with soap and water, cover with antiseptic and bandage, and if serious enough, visit your doctor.