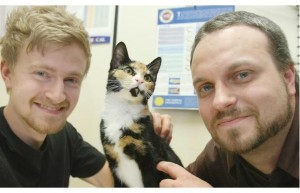 Edmonton, Canada – This cat must have had a serious will to live considering all that she has gone through; being stuck at the top of a 59 foot tree for five days was just the beginning for her, as it was discovered when she was rescued that she had a pellet lodged in her head, although it is unknown who shot her or why.  As bizarre as this may sound, you can rest assured that the story does have a happy ending.

The tiny cat was originally discovered by Kevin Medin of Aspen Gardens when he heard faint cat meows while he was in his backyard.  He followed the sounds until he came to the bottom of an evergreen tree and could see up at the top rested an obviously lost and scared cat.  Over the course of the next five days, Medin called a variety of places to enlist help to get the cat out of the tree, including the fire department, local animal agencies, arborists, and wildlife control, but their answers were all the same – the cat will come down on its own.

After trying everything he could think of to get the cat to come down on its own from calling it to opening cans of tuna, the cat just wouldn’t budge.  Being unacceptable to Medin, he called one more place, his neighbor who happens to be the owner of Vertically Inclined Rock Gym, a facility that offers recreational rock climbing courses.  At first he received the same answer he got before, but with a twist!  Medin spoke with the company’s operations manager, Jason Day, who explained that the company does not have insurance for such things as rescuing a cat from a tree, but just as quickly offered to check out the situation on his own time.

Less than an hour later, Day and his colleague, instructor Zakk Krudys arrived in Medin’s backyard to see if it would be possible to rescue the cat on their own.  “The tree was very climbable,” says Day, “so we were able to set up.”  Krudys did the climbing, while Day anchored and guided the ropes.  All together, it took about an hour to get Krudys close enough to the top of the tree, and eventually couldn’t get any higher due to the thinness of the branches.

“The cat was still six or eight feet farther up the tree, but I just couldn’t go any higher,” says Krudys.  “That’s when I said: ‘OK, buddy, you gotta work with me here.  You have to come down a bit.’ ”  As if the cat knew exactly what Krudys said to her, she slowly made her way toward him, gingerly stepping from branch to branch.  When she got close enough, she actually leaped into Krudys’s outstretched arms and quickly began to purr.

The cat was taken to Westbrook Veterinary Clinic where it was discovered by the vet that she had a pellet lodged in her head.  Whoever shot her clearly was trying to kill her, but this cat wasn’t going out that way!  The vet will perform surgery to remove the bullet later this week, but in the mean time, she is recovering very nicely.  “It was such a triumphant ending,” says Medin.  “She had such a will to live.  All we need now is to get her the great home she deserves.”