New York City – New York City is known to be home to many wild rats and in fact ridding the city of wild rats is a top priority. However, over this past weekend New Yorkers were treated to a fashion show held as part of the New York City Fancy Rat Convention that was organized by the Big Apple Rattery, which provided all the rat models. That’s right, domesticated pet rats are fast becoming a hot item in the pet world and they had a chance to show-off some amazing outfits on the ratwalk like bridal dresses and tuxedos.

Rat owner Kelly Antonova, 27, said: “Rats have amazing personalities. They are like a dog, cat and ferret all rolled into one. But each also has its own individual character. I’ve had rats who swim in a little bath, or sleep on the bed. You can train them on a little lease and they will learn how to dance, and how to fetch things like a dog. Rats are very sociable and give you a lot of love. They are very intelligent and share similar characteristics to humans.”

Kelly, from Long Island, who runs a pet supply business, Kelly Critter Creations, added: “Friends of owners usually end up falling in love with rats and getting their own. It became more fashionable once people realized celebrities were keeping rats. The message is finally getting out that rats make great pets.”

Rats are found all over the world and are one of the most destructive pests in the wild. They spread disease; contaminate food and damage buildings and structures. However, domesticated rates are very clean, intelligent and make great pets. It is because of their intelligence that makes them easy to train and that is also why they are used in laboratories. 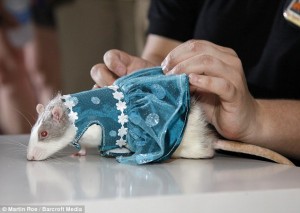 Domesticated rats can be taught simple tricks like stay, sit and to go in the litter box. Rats that are handled from birth tend to be very friendly towards humans and enjoy daily attention. Rats tend to get bored easily and it is suggested that you get two so that they can take some of the entertaining off the owner’s hands. It is best to have either two males or two females so they don’t breed or get them spayed or neutered. Also, make sure the place you purchased your rats keep males and females separated so you don’t come home with a pregnant pet.