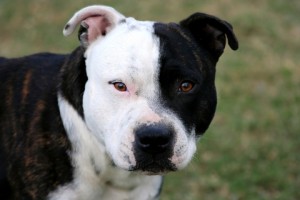 MARYLAND – The Maryland Court of Appeals has officially made an extremely misguided declaration that all pit bull-type dogs are inherently dangerous.  This horrible decision, handed down by Judge Dale R. Cathell, is already having a negative effect on these types of dogs in Maryland, as owners are being forced to abandon them for fear of being evicted from their places of residence.

The Court of Appeals made this decision last week and it effects more than the dogs; anyone in custody of this type of dog including owners, landlords, veterinarians, kennels, animal shelters, and rescue groups are considered liable even if the dog does not pose a threat.  Reactive measures of this decision are:

The decision is severely misguided due to the fact that a pit bull-type dog is not born aggressive.  Socialization (or lack thereof), environment, type of owner, and other factors go into how these dogs become animals to fear.  For the Court of Appeals to discriminate over the entire line of pit bull-type dogs is massively unfair and detrimental to a huge number of dogs and their owners.

Because the decision effects all pit bull-type dogs, it includes dogs that just look like pit bulls.  In fact, according to a recent study conducted at the University of Florida by the Maddie’s Fund Shelter Medicine Program which looked at a group of 120 dogs at four animal shelters, shelter staff identified 55 dogs as “pit bulls” when in actuality only 25 of them were confirmed as pit bulls by DNA analysis.  In addition to that, the staff failed to identify 20 percent of the dogs who were pit bulls by DNA analysis, while only 8 percent of the “true” pit bulls were identified by all staff members.  So who ultimately decides which dogs the discrimination law will effect?

This decision is one that will cause uproar and backlash until further changes are made.