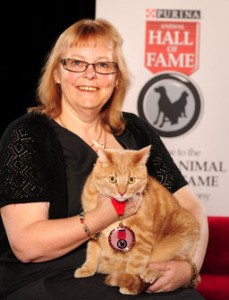 It seems only fitting that as we humans have awards for almost everything that our pet heroes should also receive recognition and rewards for their heroic deeds.  Four pets were recently inducted into the Purina Animal Hall of Fame located at the PawsWay Pet Education Centre in Toronto Canada.  The four inductees into the Purina Animal Hall of Fame for 2012 including Monty, Nanook, Bree and Titan.

“Each year, we honor pet heroes and their life-saving acts.  Our 2012 Inductees struck us not only by the intuitive sixth sense related to life-threatening medical conditions, but also their incredible persistence to act on that intuition,” said Mary Siemiesz, Executive Director of the Purina PetCare Legacy.  “The Purina Animal Hall of Fame is at the heart of who we are as a company and we are incredibly privileged to celebrate these extraordinary heroes.”

Purina has been inducting pets into its Hall of Fame since 1968 and is the oldest running pet recognition program in Canada.  The Hall of Fame has since its inception, inducted 155 animals including 128 dogs, 26 cats and 1 horse.  As pet owners we are aware of how the senses of our pets are many times more evolved then our own.  But many of would never think about the small changes in the way we might smell when our blood sugar is low or the way we sound when our breathing gets labored while sleeping or the changes we go through due to illness is sensed by our pets.

Researchers don’t really know how the bond works between pets and their owners but they do recognize that our pets can sense changes in smell and mannerisms many times faster than humans.  The inductees showed that they could not only tell that there were life threatening changes in their owners but took the initiative to do something that ultimately saved 4 lives.

Monty is a Ginger Tabby cat from Camrose, Alberta saved his owner Patricia Peter by nibbling on her left hand while she was sleeping to wake her up.  Peter uses her left hand to test her blood sugar.  “I think I would have gone into a diabetic coma if it weren’t for Monty,” Peter said.  “I felt dizzy, disoriented, shaky.  I couldn’t focus, I was nauseous.  ”Peter’s blood sugar had dropped dangerously low to 2.7 by the time she made her way to the kitchen to get her medication.  Monty never left her side until her blood sugar levels returned to normal.

Nanook is a Siberian Husky from St Catharines, Ontario that was barking, licking his owners faces and trying desperately to wake Coleen and Gord Kilby.  Upon awakening, Coleen could feel pressure upon her chest and her arm had gone numb.  Coleen was having a heart attack and the parametics were call by husband Gord and Coleen was taken to the hospital and had heart surgery to put in three stents.  If it had not been for Nanook, Coleen would not have survived.

Bree is a two year old Dachshund from Blissfield, New Brunswick who saved her owner Michele Gilks by putting her nose in Gilks’ mouth, digging frantically next to her in bed and licking her face.  Gilks’ husband was also awakened and Michele felt as though she was drowning.  Gilks was suffering with very high blood pressure and potentially lethal sleep apnea that cause individuals to stop breathing in their sleep.  Her husband called the ambulance and Gilks was given oxygen and rushed to the hospital.  This was not the first  time Bree had done this and Gilks now believes that Bree was helping her to breath and ultimately has saved her life many times.

Titan is a police service dog from Oakville, Ontario and partner Constable Tara Mclorn were called to rescue a woman that had run out of a house after taking an overdose of pain killers in a storm with hurricane winds and driving rain.  Modern technology helped get the team in an approximate area where they thought the woman had headed.  If not for the dedication and tireless pursuit by Titan the woman would not have been found and ultimately saved her life.

If not for the heroic deeds of these four animals lives would have been lost.  Pets are truly mans and woman’s best friends.