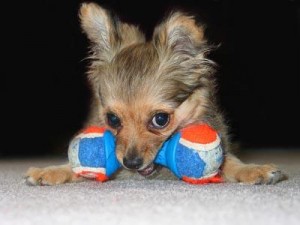 Playing with your dog is just as rewarding for you as it is for them, but tossing around the same old tennis ball will get old real fast.  Although it may be your dogs favorite toy, both indoors and out, there are a few new toys that are as fun as they are unique.

Whether your dog prefers soft or hard toys, with squeaker or without, you’ll want to at least give a few of these a try.  Break out of the boring and temp your furry friend with something he’s never played with before (that’s half the fun – watching them try to figure out something new)!

The Twiz
The first new toy we think is just awesome is the Twiz.  The Twiz puts a whole new spin on playing fetch with a design made to have the toy soaring through the air.  The Twiz is an all in one new dog toy; it’s a chew toy that holds treats inside that dogs can chase, tug, chew, and catch, and it floats in the water.  The Twiz is made of Zogoflex®, a durable, rubber-like material that’s pliable, yet tough enough for dogs to tug and chew on.  It’s completely recyclable and made in the United States.  It is also non-toxic and FDA compliant.  The twiz varies in price depending on what store or website  you purchase it from.

Take a look at the Twiz in action in this video: 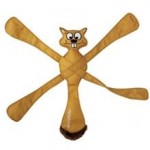 The Pentapulls Squirrel is a very unique looking toy for dogs that provides so many different ways to have fun!  Your dog can pull, shake, and roughhouse with this heavy-duty, water-resistant, funny looking toy.  It even has 5 squeakers inside to entertain even the most of tame dogs!  The arms and legs of the Pentapulls Squirrel have a unique “X” design and they are “super stitched” to withstand pulling and tugging.  The arms and legs do not have stuffing inside so they remain flexible.

This unique dog toy will provide hours of fun for your dog and is sure to bring a little humor to your play time!

Dog Brick Interactive Game Dog Toy
This toy is truly unique and actually requires dogs to dislodge the removable bones, then to push the sliding covers to access hidden treats.  More than just a toy with a squeaker in it, this toy will keep dogs busy for hours!  Watch how it works in this video: