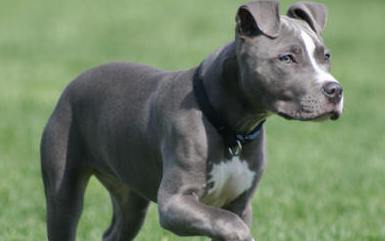 Kensington, PA – Sunday was a happy day in the lives of 9 puppies and 3 adult dogs when they were rescued from unsanitary conditions in what is suspected was a dog breeding and fighting ring in Kensington, Pa.  This was the second time the same row home on the 3300 block of H Street, owned by Rasheed Holland, was raided by police for harboring and mistreating dogs; the first time, two years ago, 18 dogs were rescued.

With search warrant in hand, animal cruelty officers arrived at Holland’s home to find two of the twelve dogs tied up in the back yard, living in filth.  The remaining dogs were found in the basement in what can only be described as unsanitary and cruel living conditions.  The dogs were found in need of veterinary attention as well as much needed TLC and were immediately tended to.

Pennsylvania SPCA spokeswoman Wendy Marano said Holland, 36, was arrested and charged with multiple felony counts related to dog fighting and other offenses for keeping animals in unsanitary conditions and failing to provide veterinary care.  “Several of the animals appeared to have old scars and wounds from suspected fighting,” said George Bengal, the PSPCA‘s director of Humane Law Enforcement.  “Animal fighting is an horrendous form of animal abuse.  We are glad were able to intervene when we did.”

The “pit-bull type” dogs were all given appropriate medical attention and are going to be just fine, although they still need continuing veterinary care.  In fact, two of the puppies have already been adopted and are safe in new homes!

Dog fighting paraphernalia as well as narcotics were found on the property which beckoned the need for Philadelphia police to be called in.  Holland may (hopefully) face additional charges in connection with the narcotics.

No dog, or any animal for that matter, should ever have to endure what horrible people like Holland consider fun.  If you suspect dog fighting, you can call the HSUS tip line at 1-877-TIP-HSUS and your identity will be protected.  You can also email the PSPCA with any info at [email protected]