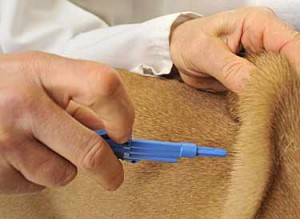 Come 2016, lost dogs in the United Kingdom will be a thing of the past. At least, that’s the goal of new legislation that requires pet owners to have microchips implanted in their canine companions. The UK Department for Environment, Food and Rural Affairs (Defra) announced the new requirement in a statement released on February 6.

“Microchipping is a simple solution that gives peace of mind to owners,” Environment Secretary Owen Paterson said in the statement. “It makes it easier to get their pet back if it strays and easier to trace if it’s stolen.”

While UK residents are encouraged to have their pet chipped as soon as possible, there won’t be any legal consequences for not doing so in the near future. The deadline for microchipping is currently set for April 6, 2016, so there’s no rush.

Chipping usually costs between $20 and $50 in the United States, and UK residents face a similar fee when they request the procedure. Defra doesn’t plan on forcing costs on pet owners though; part of the plan is to supply a free microchip to every dog that needs one. Over half of the UK’s domestic dog population is already equipped with chip, so the task isn’t as daunting as it may seem.

“Owners will be able to get their dog microchipped for free at any of the 18 Dogs Trust centres across the UK, and free microchips will be offered by Dogs Trust to local authorities, housing associations and veterinary surgeries,” according to Defra’s statement.

Over 100,000 of the UK’s dog population, which is currently around 8 million, are dumped every year, according to Defra. That’s a lot of four-legged critters putting a strain on the budgets of government agencies and charitable organizations, which are already stretched thin. Dumped and lost pups cost organizations and agencies in the UK over £50 million every year.

“Compulsory microchipping will make a huge difference to the work of charities like Blue Cross as we struggle to find homes for an increasing number of stray and unwanted pets,” Blue Cross chief executive Kim Hamilton said in the statement.

Defra officials aren’t the only ones who approve of microchipping. A January 24 blog post published by Cesar Millan, revered by some as the “dog whisperer,” makes his thoughts on the subject clear.

“To me, the decision whether to microchip your dog or not is an easy one,” he writes. “You should microchip your dog as soon as possible, and you’ll rest easier knowing that if anything happens to your dog, you’ll have a better chance of recovering him.”

Despite the apparent benefits of microchipping, not everyone is satisfied with making it mandatory. Many who argue against it are concerned about the potential side effects that chipping could have on canine health. Some dogs have experienced negative reactions or infections following chip insertion, although most have no problem after the procedure.

When the state of California’s governor shot down a state bill mandating microchips for dogs in 2011, health wasn’t his primary concern. His reasoning: “There is no need for state law to mandate the procedure…”, instead let animal shelters and other agencies handle chipping policies individually, according to the vetoed legislation’s bill analysis.