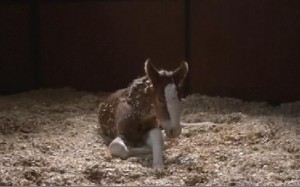 Clydesdale horses and Budweiser beer have gone hand in hoof since 1933. The Clydesdales made their first Super Bowl ad appearance in 1986 and have appeared in a total of 23 Super Bowl ads. To many Super Bowl fans, the commercials are as much a part of the event as the game itself and Anheuser-Busch rarely disappoints. This year’s “Brotherhood” commercial featured the relationship between trainer and horse.

The foal in question was born on January 16th at Anheuser-Busch’s Warm Springs Ranch near Booneville, Missouri. She appeared in the commercial just seven days later. The ranch is over 300 acres in size and home to more than 100 Clydesdales. She was the second foal born there this year. The first, a colt, was born 36 hours earlier. More than thirty foals will be born there this year. Although the majority of the Clydesdales reside at Warm Springs, which is open to the public by booked tour, Anheuser-Busch has a second farm in St. Louis called Grant’s. Horses can also be seen at Anheuser-Busch breweries in St. Louis, Missouri, Merrimack, New Hampshire, and Fort Collins, Colorado. Budweiser has more than 200 Clydesdales across the United States.

With Fleetwood Mac’s “Landslide” playing in the background, the commercial tugged on more than a few heartstrings. It has garnered over 10,500,000 views on YouTube so far. It was also the subject of many tweets including those of Jimmy Fallon, Carrie Underwood, Jeff Daniels, Jose Canseco, and Hank Azaria. At the end of the commercial, viewers are asked to help name the foal in a brief contest that ended with an announcement on Feb. 5, 2013. The contest received over 60,000 name suggestions through Twitter and Budweiser’s Facebook page.

The winning name was Hope. “Many of our fans wanted a name to reflect their optimism and spirit, which the name Hope encapsulates beautifully,” noted Budweiser brand director, Lori Shambro. The contest was so popular that the name for the first foal born at Warm Springs was also chosen from the suggestions. He’ll be called Stan after St. Louis Cardinals’ great Stan “The Man” Musial who died in January at the age of 92. Pictures of Stan and Hope can be seen on Budweiser’s Facebook page.

Hope now weighs 200 lbs and will weigh more than 2,000 lbs by the times she is full grown. She will never appear in hitch with the famous red and gold wagons though. All the horses that pull the wagons across the country are geldings. They must be at least four years of age, weigh between 1,800 and 2,300 lbs and be 72 inches at the shoulder. Because consistency makes the team look more impressive, there are ideal markings and colours for the hitch horses. They should be bay in colour with a white blaze, black mane and tail and four, heavily feathered, white feet.

The Anheuser-Busch Clydesdale herd is one of the largest in the United States. The hitch teams appear in events across the country sponsored by Budweiser. Given the immense popularity of the horses, they are sure to remain a fixture of the Budweiser brand and appear in many more Super Bowl ads.

What is the Smartest Dog? Dognition Aims to let You Know