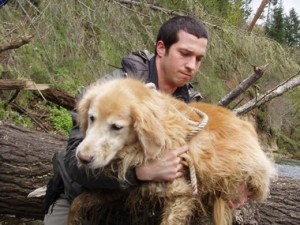 Eagle Creek, OR – Curiosity got the better of two Golden Retrievers, causing them to take a tumble down a 175-foot slope towards the rushing water of the Clackamas River.  Apparently, the retrievers, Doug and George, ten and eight years old respectively, were quite interested in what their owner, John Grady, was doing by the fence, which traces the edge of a bluff high above the Clackamas River, northwest of Estacada.  Grady was actually fixing a hole in the fence that was damaged in one of the more recent storms that passed through the area.

When Grady has his back turned, the two curious dogs slipped through the hole in the fence, and managed to slip from an unstable edge of the bluff.  Luckily for both the dogs and Grady, a kind neighbor saw the event taking place and rushed to the bottom of the slope in the hopes of rescuing the dogs.  The neighbor, Dustin Shatner, made it safely to Doug and George and proceeded to comfort them until more help could arrive.  “They were a little shaken up,” said Shatner.  “They didn’t know what happened or what was going on.”

Shortly after Shatner raced to help the dogs, the Clackamas County Sheriff’s Marine Unit deputies, Estacada Fire and Clackamas Fire District 1 crews to arrived to the scene to rescue the dogs.  They rescued the retrievers, who were surprisingly unharmed, along with Shatner, who suffered only a few scratches to his arm.  During this two hour ordeal, Grady could only hope for the best.  “Oh, they’re fine now,” said Grady, 51.  “One’s limping a little bit, but he’ll be fine.  They’re still stupid, though.” 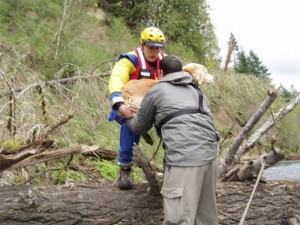 Harrison Zieverink of Clackamas Fire Station 8 passes one of the rescued dogs to Bill Strouse, a new recruit for the Clackamas County Sheriff’s Office.

Bill Strouse carries one of the dogs to a rescue boat tied to debris on the Clackamas River.

Thanks to Shatner, Zieverink, and Strouse, the two Golden Retrievers were saved from what could have been a tragic event.  Although Doug and George were shaken up due to the tumble down the 175-foot slope, they were otherwise unharmed and will hopefully have learned to stay away from the edges of cliff’s in the future.