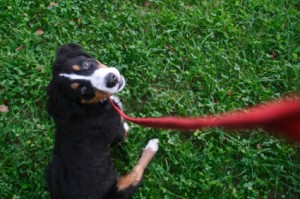 The recent increase in coyote sightings has prompted officials to warn pet owners to take extra precautions when allowing their small pets to roam freely outdoors.  There are many benefits to living in the outskirts of the suburbs, with the natural wildlife, greener views, and lush scenery, but with that style of living also comes the threat of the harm that naturally occurring wild animals can cause to your pets, especially cats, dogs, rabbits, and other small animals that spend time outdoors.  Coyotes are not necessarily known to attack household pets, but in the event they cannot find suitable food, your small furry friends could be their next line of survival.

From a distance, coyotes appear to resemble dogs, particularly German Shepherds.  At a closer look, they can be recognized by a thick bushy tail, which is usually pointed down when it walks, a long pointy nose and pointy ears.  Coyotes range from 22 to 42 pounds, and are typically animals of habit; they will hunt both day and night, but will tend to use the same trails and generally travel at the same time day to day.  Typically, coyotes will eat small animals such as squirrels, rabbits, or mice, but they have been known to eat birds, birdseed, pet food, as well as some fruits and vegetables.  If a coyote cannot find these foods, small pets in the area could become targets for their next meal.  Coyotes are capable of taking a small cat or dog but will rarely strike at larger dogs (35 pounds or more), or at a supervised pet where humans are present.

According to the Illinois Department of Natural Resources statistics, coyote attacks against humans are rare.  Those statistics show that there have been only 16 cases in 30 years of coyotes attacking humans, which usually occurs when people try to hand-feed the coyotes.  The IDNR says the most important rule is to never feed coyotes because it completely breaks down their natural fear of humans and can cause them to become unusually aggressive.

There are a few things you can do as a pet owner to safe-guard against the possibility of your pet ending up as a coyotes lunch.

Any pet should be able to enjoy the great outdoors, running, playing, or just relaxing.  Taking certain precautions against the threat of coyotes can mean the difference between life or death when it comes to your small pets.