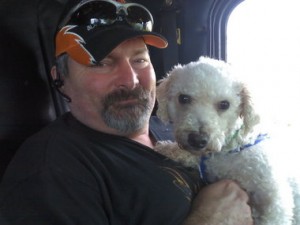 Oregon – The pet transportation system known as Operation Roger networks a group of truck drivers to transport needy pets to their owners across the country. These pets would normally be abandoned by their owners due to the high cost of getting these pets transported. “We’re truck drivers,” said Sean Kiel, a Dallas trucker among the ranks of Operation Roger, “We don’t have the time to volunteer at anything else, really, so what we do is help animals. We haul them and reunite with their families.”

Sue Weise came up with idea for Operation Roger and named it after her pet toy Manchester terrier who traveled with Wiese in the cab of her truck. In 2005, after hurricanes Katrina and Rita,  “I heard all the horror stories about pets being left behind,” she recalls, “and I was driving on one of those East Coast roads, listening to all of this, praying, and said, ‘Lord, what can I do? I’m just a truck driver.  And then the word just came to her: “transport.”

Weise was encouraged by family and friends to use her CB radio and ask if any other truck drivers would be interested in helping transport needy pets to their new homes. “Before that interview ended, I had 12 calls to return,” Wiese says. “And it’s been a whirlwind.”

Operation Roger has delivered over 600 animals to homes since 2005. This year they have transported 87 pets including dogs, cats, ferrets, chinchillas, rats and hamsters. They recently turned down a 150 pound pig that couldn’t fit in the truck cab. Other requests included an alligator and a disabled duck which they also turned down.

Pet owners that want to use Operation Roger must first submit an application. “We have to know as much as possible about the pets to tell the driver how to handle it,” Wiese says. In addition, applicants must pay a non-refundable, tax-deductable application donation of $25.

Each Sunday, the 29 volunteer drivers have a conference call to schedule the week’s transportation agenda. “It just takes the right driver in the right area, in the right time, going the right direction to help the pet,” she says. In an ideal world, the driver picks up the animal and delivers it to the destination. Usually, one driver meets another driver and passes the animal along until it reaches its destination.

Kiel found out about Operation Roger will he was looking for a way to get his own pet Jo, a German shepherd from Oregon to Kentucky and found out just how expensive it could be. “From our own research, (it) would cost $1,000 to transport her out here, and that’s just crazy,” says Kiel’s fiancée, Julie Mance. “To me, it’s not feasible to put out that kind of money, especially in this economy.”

On December 5th, Kiel was surprised by fellow Operation Roger volunteers Stephanie McNeel and William Stewart, from Fort Worth Texas, who had arranged to bring Jo to Albany under the pretense that they wanted to have dinner with Kiel. “Kiel is an important addition to the group because only one other driver runs the I-5 corridor, out of California. Kiel’s arrival helps to get a lot more pets moved up the coast,” Wiese says.