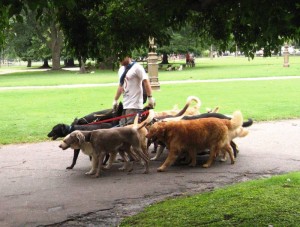 San Francisco, CA – A new bill making it’s way through the Board of Supervisors here is designed to limit the number of dogs a professional walker can have at one time to eight, as well as require liability insurance, and permits to conduct the walking.

In a city where the number of pets outnumber the number of children, this news is important, as dog-walking is big business in San Francisco. There are nearly 500 professional walkers there, with only about 70 signed up on the Dog Walking and Professional Services Referral List operated by the office of Animal Care and Control.

Supporting the legislation is San Francisco Professional Dogwalkers Association president, Angela Gardener, who said, “For the many professional dog walkers who are well-trained, who know how to care for dogs, and who respect the city property they use, this legislation will legitimate them and will require dog walkers who lack training or skills to get training.”

The initial bill considered limiting the number of dogs to six, however many walkers complained that the limit could devastate their business. More than 80 percent of feedback received agreed with the limit of eight dogs.

This comes on the heels of new guidelines issued by The Golden Gate National Recreation Area limiting the number of dogs a dog walker can walk to six. The GGNRA, which is technically under the purview of the National Park Service and outside the jurisdiction of any regulations passed by the Board of Supervisors, is also in the process of crafting a controversial new dog policy that could ban off-leash dogs from popular havens like Fort Funston and Crissy Field.