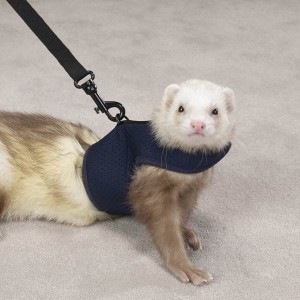 Sacramento, CA – The state of California is now the only state in the continental United States with an active ban on pet ferret ownership.  First prohibited in 1933, the ferret ban was put into place in an attempt to control environmental factors and safety concerns.  Past research by the Fish and Game Commission found ferrets presented a risk as predatory animals to the regions poultry farms and other small animals.

The first attempt to pass a bill that would relieve the ban on ferrets as pets failed,  resulting in a veto by California governor, Arnold Schwarzenegger.  Supporters have added ammunition to their argument and are currently trying to prove their message to remove the ferret ban.  Pat Wright, founder of LegalizeFerrets.com said, “I think that there’s very little doubt that the ferret ban is doing economic harm.”

The question remains though, how much economic harm?

Supporters of the attempt to remove the ferret ban say that California is missing out on revenue that is desperately needed in these hard times.  The revenue that could be brought into the state by not only the sale of each ferret, which ranges from $100 to $200, but the cost of supplies, housing, and maintenance is an opportunity that the ban is prohibiting the state from capitalizing on.  A West Coast Ferret Association member, Debby Greatbanks, said, “It’s a good $500 investment”.  “There’s the cage, there’s the food, there’s the litter pans.”  The cost continues to rise as the introduction of toys and treats come into play.

The number of people in California who want to own a ferret – and who can afford it – is astounding according to studies.  The influx of money would be a boost that could significantly help the economy.

Michael Maddox, Vice President of government relations for the Pet Industry Joint Advisory Council, reports, “I don’t think there’s any doubt that there would be a positive economic impact for California, for California businesses, and for revenue for California”.

The ongoing fight to remove the ban of owning ferrets as pets in the state of California continues to look for a bill author in the legislator, hoping their new argument will play a part in the decision to relieve the ban.