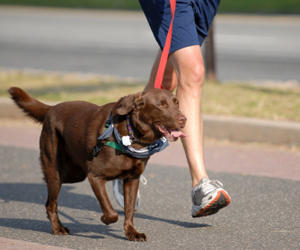 According to a recent study conducted at Mendel University in the Czech Republic indicates that dogs being walked by men are four times more likely to be aggressive towards other dogs.  The study also found that dogs on a leash are more likely to attack other dogs while out for a walk.  The study consisted of approximately 2,000 dogs that researchers watched to determine how their sex, age, size, as well as the owner’s gender influenced the dogs daily outdoor walks.

The nearly 2,000 dog-to-dog interactions were studied in thirty popular dog walking areas in the city of Brno in the Czech Republic.  The reasoning behind the dogs increased aggressiveness towards other dogs when being walked by a male is thought to be related to the fact that dogs are so good at reading human behavior that they are transferring a male’s aggressiveness to their own actions.

The findings of the increased aggression when on a leash are directly related to the fact that when a dog meets another dog while on a walk, their first instinct is to run around each other.  When on a leash, it makes it difficult to do that, in turn causing a bit of aggression to show.

“They can’t do this run-around behavior when on a leash and they likely feel more threatened,” said Lisa Peterson, spokeswoman for the American Kennel Club.  “They are also more inclined to resource guard, with the owner being the resource.  It’s as though they are communicating, ‘He is my owner.  I don’t want you to have him because he feeds and cares for me.'”

The study also found (not surprisingly) that a dogs favorite thing to do when meeting another dog while out for a walk is to sniff each other’s bodies, then attempting to play with each other.  Another reason for the increased aggression when on a leash is that they become frustrated when it gets in the way and that aggression comes out as signs of getting ready to attack.

Other results of the study include males and females prefer play with each other rather than with members of their own sex, males sniff females more often, dogs prefer to play with similarly sized individuals, adult males mark the most, and puppies play together more than twice as often as adults and 11 times as often as seniors.

Did any of these findings come as a surprise to you?