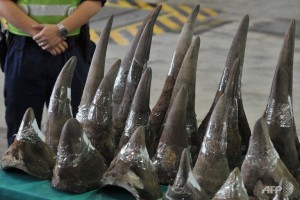 The illegal wildlife trade suffered a setback recently thanks to a multinational crackdown led by China. The crackdown included Asian and African nations, in an operation named COBRA, which spanned from January 6 to February 5.

Seized in the crackdown were:

In addition to the seizure of these items, more than 100 suspects were apprehended.

The work was done by 100,000 law enforcement officials from Asia and Africa in an effort to target poachers. However, that’s only half the job. This multinational effort will also begin to target Chinese buyers as well.

A big step forward for China

This wasn’t just a big step forward for the fight against illegal wildlife trade; it was a big step for China. COBRA marked the first time China took charge of an international effort to reduce illicit trade in endangered species.

China’s Foreign Ministry spokesperson Hong Lei specifically commented that the country is paying great attention toward the protection of wildlife, including elephants. This comes at a time when China’s (and other countries) demand for illegal wildlife poaching of endangered species in Africa has increased. In 2011, 44 tons of illegal ivory was seized worldwide. Around 11,000 elephants have been killed in Gabon since 2004, for their tusks. African wild rhinos used to number in the hundreds of thousands; there are now less than 30,000 in existence.

The illegal wildlife trade totals nearly $10 billion annually. The ongoing efforts of COBRA aims to stamp that number out.

Aside from COBRA, China has shown its dedication toward stamping out illegal trading of wildlife animals in other ways. This past spring, Chinese police uncovered more than 700 cases of illegal wildlife trade during a crackdown on websites and local antique markets.

Nearly 6,000 markets were inspected during this crackdown. More than 130,000 animals were seized, 7,000 shops were closed down and 628 websites taken offline for selling banned animals. Even online messages were removed if they were related to the illegal wildlife trade.

That crackdown helped regain some order to the internet environment, as well as to ensure “national market order,” according to a statement released by the State Forestry Administration of China.