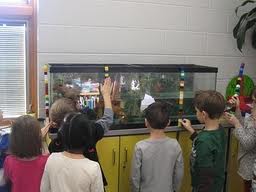 Everett, Wa – A majority of parents can remember when they attended school that animals like turtles, hamsters, rabbits, guinea pigs, and chicks were common. However, in recent years many schools have limited or banned animals from the classroom unless they are part of a science project. Pets in the classroom is not a new idea, however many teachers are promoting bringing pets back to school as a way to better engage students.

In Washington State several school districts already have guidelines in place. Animals may be fun to be around, however they can spread disease. Also, students with allergies to animals could have a reaction and that students would be exposed to animal wastes.  “It’s simply an ongoing issue schools have had to deal with,” said Donn Moyer, a spokesman for the state Department of Health. “The idea behind it is to protect the health of students.”

The number of children with asthma increases as they get older, from 15 percent of sixth-graders to 21 percent in seniors, according to a 2008 state Department of Health report.”You have to be very cautious about the environment in which they learn,” Moyer said.

One teacher uses his guide dog, Franklin, an eleven month old golden retriever to help teach physics to a class as he goes sliding down the hallways on the polished tile floor. “A body in motion stays in motion,” Mark Rosenblum, a science teacher at Everett’s Sequoia High School, said with a chuckle, paraphrasing one of Isaac Newton’s laws of motion. “Or that every action has an equal and opposite reaction.” And a genetics lesson can be much more fun with a 62-pound, tail-wagging dog sitting just feet away, as Rosenblum explains how two black Labrador retrievers can have black, chocolate or yellow offspring, depending on the genetics of their parents.

Rosenblum has used guide dogs in training as part of his classroom at Sequoia High School for 15 years. It’s part of the dogs basic training before they are sent away to be trained as guide dogs for the blind. “Kids sign up for my class initially because they want to be with the dog,” Rosenblum said. “Then, I win them over with the science and math.” However, the dogs are removed from the classroom if any student is allergic.

Because of the potential liability concerns, the State has asked that each school district draw-up a policy how to handle animals in the schools, other then science project animals, and whether animals should allowed in schools.

Yet even with policies like these and warnings about the potential for spread of disease, the National Science Teachers Association endorses having animals in the classroom as part of a science class. Pets can excite students about science and can be a valuable learning tool, Francis Eberle, the group’s executive director said. “The experience of caring for live animals is an experience that can’t be simulated and is a valuable tool to engage students in hands-on learning and inquiry,” he said.
﻿