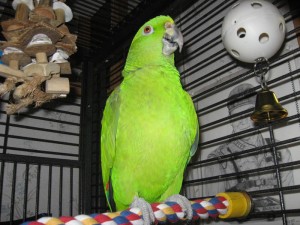 Fort Walton Beach, FL – The determined owners of Petland resorted to an unusual and unconventional way of recovering a parrot that was stolen from their pet store on January 21.  The parrot, a male Amazon Nape, worth $1,500, was returned safely to owner, Glen Wentworth, with the help of an undercover sting operation!  Even in the pet world, you never know who’s watching!

In the 10 years that Wentworth and his family have been running Petland, they’ve never had a bird stolen, or any other kind of malicious event.  “We’re a little protective of our guys, Wentworth said.  “It was like somebody coming in and stealing one of my family members.”  His first step was to involve the Okaloosa County Sheriff’s department, where he handed over the taped video surveillance, in the hopes that it would contain a clue to the kidnapping.

What ultimately lead to the capture of the parrot thief was, “a very conscientious, kind lady”, said Wentworth.  While she was in Pennsacola, someone tried to sell her a parrot that matched the type that was stolen.  She bravely came forward with this information, which further involved the Escambia County Sheriff’s Office, who helped Wentworth set up a meeting with the suspect to “purchase” a parrot.

According to an Escambia County Sheriff’s office report, Michael Alan Lemonds re-sold the stolen parrot to Wentworth for $200.00.  Upon exchange of money for parrot, Lemonds was arrested and charged with dealing in stolen property.  The taxi driver who brought Lemonds to the scene, Rodney Curtis Goldsmith, was identified as an accomplice and charged with dealing in stolen property as well.  According to the police report, Goldsmith was also caught with cocaine, an additional charge against him.

Now that Lemonds has been captured and charged with dealing in stolen property, the Okaloosa County Sheriff’s Office intends on charging him with burglary and grand theft as well.

This extreme way of capturing the parrot thief is not always the recommended option, but it certainly worked for the determined owners of Petland!