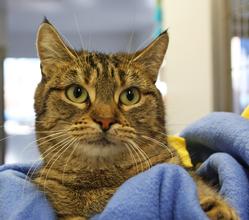 Tucson, Az – Storm, a three-month-old tabby was rescued in critical condition earlier this week after she was found by an apartment manager after being trapped by a squirrel trap that had fallen into a cooler. She survived even though she had scratches to her face and her body temperature was very low. Storm was then turned over to the Human Society of Southern Arizona for hypothermia and frostbite treatment.

All pet owners should take note that severe winter weather can be very detrimental to the health of your pet. Sometimes pet owners fail to realize that even with all that fur many animals still cannot cope with extreme temperatures. Many owners fail to notice when outside temperatures drop to dangerous levels. The Human Society is reminding every pet owner that frigid temperatures and server winter weather can be dangerous and even deadly to pets. Pets that are left outside in the cold can be exposed to hypothermia and frostbite. The Human Society is asking all pet owners to bring their pets in out of the cold. It’s also important to check under your car to make sure that your cat has not climbed under your car seeking warmth from under the car’s hood.

Fortunately for Storm, her story was broadcast and she was adopted.  She serves as a reminder to all pet owners to take extra precautions with your pets during the harsh winter months. To learn more about winter safety for your pets and animals, see the Human Society of Southern Arizona.