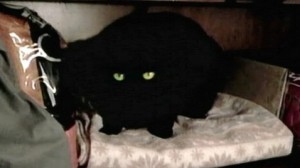 Rome, Italy – Maria Assunta, a wealthy widow of a property tycoon has left $13 million dollars to her adopted cat Tommaso. At the age of 94, Maria Assunta passed away and gave her fortune to her cat that she rescued from the streets of Rome. Tommaso’s new fortunes include cash, as well as properties in Rome, Milan and land in Calabria. The fortune places Tommaso number 3 on the list of wealthiest pets, behind Kalu the chimp and Gunther IV the German shepherd.

In an effort to make sure Tommaso was taken care of upon her demise,  Assunta worked with her attorney’s to “identify an animal welfare association or group to which to leave the estate and the commitment of looking after Tommaso,” according to the Daily Telegraph. Unfortunately, they were unable to find a satisfactory association, organization or group that would make sure Tommaso was loved and cared for properly.

Assunta’s health began to fail two years ago and she had no children to leave her fortune too so she decided to leave all her money to her cat via her nurse Stefania who took care of her.

“She had become very fond towards the nurse who assisted her,” Anna Orecchioni, one of the lawyers, told Il Messaggero newspaper. “We’re convinced that Stefania is the right person to carry out the old lady’s wishes. She loves animals just like the woman she devoted herself to right up until the end.”

Stefania is living outside Rome with Tommaso and another cat.  “I promised her that I would look after the cat when she was no longer around. She wanted to be sure that Tommaso would be loved and cuddled. But I never imagined that she had this sort of wealth,” she said. “She was very discreet and quite. I knew very little of her private life. She only told me that she had suffered from loneliness a lot.” Stefania’s location is undisclosed to avoid con artists and kidnappers.