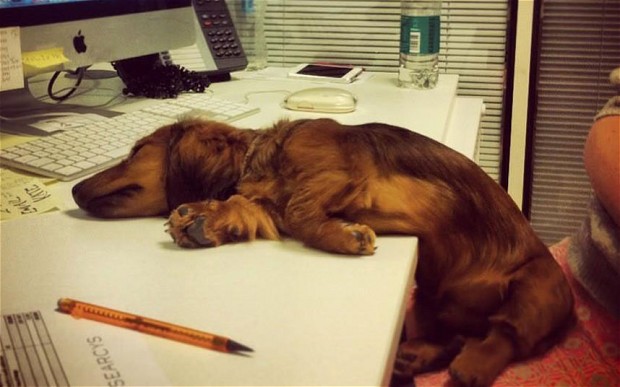 Social media has made stars out dogs, as well as people. Both Facebook and Twitter boast hundreds of accounts that are “written” by dogs. These accounts often have thousands of followers and likes. This is just for writing dogs and does not include the myriad of dog businesses, fan clubs, services, rescue groups, and breed clubs that can also be found. The friendly nature of the dog has always made him a favorite with the public. Enter Alan TBH Plumptre.

The importance of the dog on the social media scene was very apparent after the tragic demise of Alan TBH Plumptre. Alan was a red, miniature longhaired dachshund puppy, owned by Jennifer George. Ms. George is an editorial assistant at Conde Nast’s Tatler magazine. When she first announced she was getting a puppy in October, a puppy shower was held for her at the office. Alan, being a typical puppy, was absolutely adorable and quickly developed a fan club of his own. He would go to work with Ms. George each day and keep himself busy with his own dog Twitter account. He called himself a Tatler office manager by day and a badger hunter by night. Hunting for badgers was the original purpose for dachshunds and the reason for their unique body shape. Alan had a following of over 2,400 and spent his days commenting on everything he did and saw including his taste for post it notes, being carried around in designer handbags, and attending parties. His adventures attracted media attention and he was mentioned in broadcasts and by famous celebrity fans.

Unfortunately when out for a walk with a staff member, Alan is believed to have spotted someone he knew using the revolving door into Vogue House, the home of Tatler magazine. He charged ahead to greet his friend and was caught in the revolving doors along with the staffer. Firefighters were called to the scene and managed to free everyone from the doors but Alan had been severely injured and passed away at the scene.

Such was the little guy’s charm and personality that his passing became world news and his Twitter account increased to over 4,000 followers anxious to share the final picture of him posted by Ms. George along with words of thanks for all of his friends and praise for the little dachshund. Staff at the Conde Nast are said to be heartbroken. There is no word if Ms. George will be getting another dog any time soon. If she does, he will have a big job matching the fame of his predecessor. Rest in peace Alan TBH Plumptre.