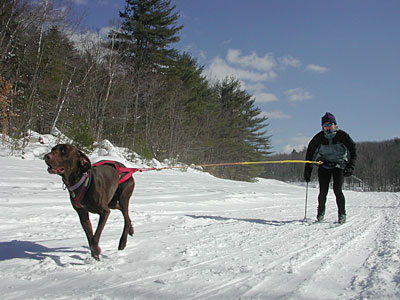 Imagine yourself on a pair of cross-country skis. The sun is beating down on your face; it’s a beautiful day. Oh, and you’re being dragged by a horse or a team of dogs at top speed through an obstacle course of jumps and gates. Sounds a bit less idyllic and more frightening, doesn’t it? Welcome to competitive skijoring!

This sport actually originated several hundred years ago in Scandinavia. The Laplanders traveled by skis in the winter. They would hold reins attached to a reindeer to make it easier to traverse the deep snow. Over the years the desire to prove whose reindeer was fastest turned it into a timed competition. The sport evolved to include horses and dogs, although in Scandinavia you can still race competitively with a reindeer. It came to North America in the 1950s as an equestrian event. Instead of a reindeer, a horse and rider pull the skier. It became even more popular when races, where the skier was attached to a team of dogs instead of horses, became a common event.

In the equestrian version, horses and skiers are paired by random draw just before the race. The horse is connected to the skier by a 30 ft rope. The course is usually several city blocks in size. It contains a series of gates, jumps 4-6ft in height, and occasionally, spear rings. The latter are rings that the skier must capture by spearing them with a jousting-style stick. They cannot drop any of the rings or they will be penalized.

In the canine races, the skier is pulled by a team of one to three dogs. They dogs are in harnesses that are attached to a tugline, which is in turn attached to a belt worn by the skier. The belt helps absorb the motion so that you don’t injure yourself. The events are 5 to 20 km in length and often include slalom gates and jumps. These are more popular likely due to the ease with which anyone can participate. All you need is a dog or two, skis, harnesses, tugline and belt. The equipment is relatively inexpensive. Any dog that is 35 lb or more can pull an adult skier. For serious racers some breeds are preferred due to their speed and endurance abilities. Pointers, German Shorthaired Pointers, and sled dogs are generally preferred for racing.

If you are just looking to get out for some exercise and fun though, virtually any medium to large sized dog can be taught to pull. Provided that your dogs are under control, you can use most trails that allow animals on them. You will want to teach your dog to pull and some basic terms. Ideally your dog at least knows “gee” (turn right), “haw” (turn left), “on by” (pass by the object or person or dog without pausing to sniff),”hike” (go), and “whoa” (stop). All of these commands can be taught and practised on your normal walks with your dog. Skijoring is lots of fun and great exercise for both you and your dogs. 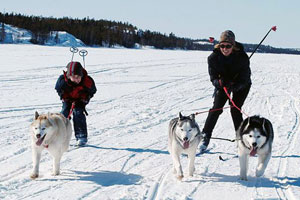