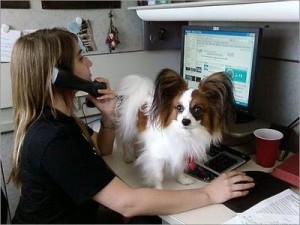 Pets are a source of comfort for many people and can make people feel more relaxed, even in high-pressure areas like your workplace. A recent study conducted by Virginia Commonwealth University reported findings that having pets at work reduces stress. The researchers also found that pets increase job satisfaction.

Research was done by spending a week at a company by the name of Replacements. The researchers used three test groups. These test groups were those who brought their dogs to work, those who owned dogs but did not bring them to the workplace, and those with no pets. Researchers monitored hormone stress levels and conducted surveys with the three groups throughout the week.

According to principal researcher and professor Randolph T. Barker, Ph.D., “stress actually decreased throughout the day among those participants who bring their dogs to work, while stress levels significantly increased for those who leave their dogs at home or don’t own pets.” He also says that “about half of those who bring their dogs to work said their productivity increased with their dog present. Additional findings indicate having pets in the workplace also increases cooperation among coworkers.”

The International Journal of Workplace Health Management published the results of the study in March. The study is the first of its kind, being a quantitative study on the psychological and physiological effect of pets in the workplace. The specific numbers provided in the findings make it quantitative research.

Companies like Replacements have already implemented pet policies. The policies were changed 17 years ago to allow employees to bring their animals to work. Now, on a daily basis, 20-30 pets are brought to work. Other companies may soon begin to follow Replacements’ lead after reading the findings of this interesting and exciting study.

Who says that Bring Your Pet to Work Day can’t be everyday?