Home Animal Welfare Algae Blooms Can Be Dangerous for Pets 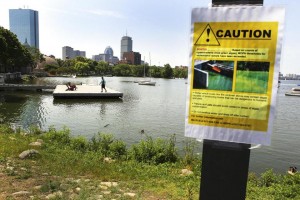 Many pet owners love to take their dogs to the beach, bay or river to swim. Unfortunately, there may be a toxic problem in the water…algae. This time of year, many bodies of water sport algae blooms that can be toxic to our pets if unwittingly consumed or if they come in contact with the skin.

Not only are these algae blooms dangerous to our pets they can also be toxic to humans as well. Red tide is one example of these algae blooms. Blue green algae is another and has begun to bloom in the Charles River in Boston for the first time since 2010. Algae blooms should be avoided and can cause upset stomachs, skin rashes and can even kill our pets.

Suzanne Condon, director of the state Bureau of ¬Environmental Health, said “on Monday, levels of the algae, also called cyanobacteria, were well below the threshold that would trigger a public health issue. But on Wednesday a measurement taken near the ¬Esplanade showed the population of algae had exploded, ¬although no toxins were detected. Health officials will continue to monitor the algae levels and watch for toxins.”

According to Julie Wood, a senior scientist with the Charles River Watershed Association, “the algae are called aphanizomenon and can look like green paint spilled in the river or strands of green silly string.”

“This doesn’t mean people shouldn’t go out in kayaks and canoes,” Condon said. She warns that “people should be mindful of the potential for health risks, avoid contact with water, and keep pets away from the water.”

“We really don’t know what causes the cyanobacteria blooms and why exactly we have them some years and not other years,” Wood said, although she added that nutrient runoff is clearly an issue. “The river is not closed,” Wood went on to say, “people should pretty much use their own discretion, avoid direct contact as much as possible, obviously avoid ingestion, which is a good idea anyway.”

Charlie Zechel, Community Boating Executive Director, said “Obviously we are happy -attention is being paid to water quality, and we are glad to have information about it.” His organization has issued a warning to boaters and cancelled children’s activities that were sure to get the kids wet like kayaking and windsurfing.

Most officials recommend that if you are going to take the chance and venture out in an algae bloom, that upon venturing ashore that you should rinse or shower to remove any algae clinging to your skin or that of your pet. It just makes sense to use caution in these situations to protect yourself, family and your pets.

Photo bylines: A clump of the algae was found near a boat dock not far from the Longfellow Bridge.
Signs have been posted near the Charles River to warn boaters, dogwalkers, and others of the potential hazard caused by the sudden bloom of blue-green algae known as aphanizomenon.