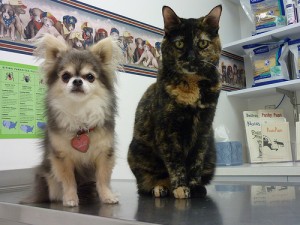 So many pets are plagued by a variety of health issues that their owners could have prevented if they were more knowledgeable about what the most common illnesses are.  Owning a pet, whether it’s a cat or dog, brings with it a responsibility to keep them safe, healthy, and happy, and with that comes a necessary relationship with a trusted veterinarian.  Visiting the pets vet more frequently is the first step to ensuring your cat or dog remains in the best possible health.

A new study released by Portland-based Banfield Pet Hospital indicates what the most common illnesses are and that they can be prevented by more frequent visits to your veterinarian.  “We wanted to focus on the diseases that are very common in dogs and cats,” says Dr. Jeffrey Klausner, Banfield’s chief medical officer.  “We wanted to focus on those, because anything we can do to prevent those diseases has a huge impact.”

The first most common pet health issue is dental disease, affecting 68 percent of cats and 78 percent of dogs.  Periodontal disease has been linked to heart, kidney and liver disease, but it can be prevented by annual teeth cleaning.  Although cats and smaller dogs have the highest incidence of dental disease, 95% of all dogs and cats will have some form of dental disease in their lifetime, with many being affected more than once.  In addition to more frequent visits to your vet, both cats and dogs should have more hard food rather than soft in their diet.

The second most common pet illness is Otitis externa, also known as inflammation of the outer ear canal.  This issue can be compared to “Swimmer’s Ear” in humans.  Although it can develop in any animal, certain breeds of dogs such as spaniels, retrievers, small terriers and miniature poodles are more prone to it.  Otitis externa is most prevalent in Himalayan and Persian cats.  The most common primary cause of this pet health issue is allergies, but can also include parasites such as ear mites (very common in cats) or foreign bodies.  With regular visits to your veterinarian, this issue is quite preventable, as well as more easily treated.

Diabetes is the third most common pet illness, and is mainly associated with obesity and lack of proper exercise.  The most common symptoms of diabetes are excessive urination, excessive thirst and weight loss despite a good appetite.  Managing this chronic disease can be time consuming, usually including twice-daily insulin injections, a change in diet and regular monitoring by a vet.

Occurring in every state during every season is the next most common pet illness, Heartworm Disease.  This usually fatal disease is 100% preventable with the proper proactive treatment, which can only be given out by your veterinarian.  Popular medications to prevent Heartworm Disease is Heartguard and Interceptor.  Signs of Heartworm disease in dogs include coughing, breathing difficulties, sluggishness, exercise intolerance, or sudden death.  It can be just one of these symptoms or any combination.  In cats, the signs are similar and include any or a combination of coughing, vomiting, breathing difficulties, sluggishness, circling, or sudden death.

Fleas are the fifth most common pet illness and are completely preventable.  Flea prevention medication is sold in most stores and usually only required a once a month application.  With regular visits to your veterinarian, the infestation of fleas would be easily recognized and treatment would begin immediately.  Pets whose owners neglect to visit the vet could be infested with fleas and not even know it, which can then cause additional health problems for your cat or dog.